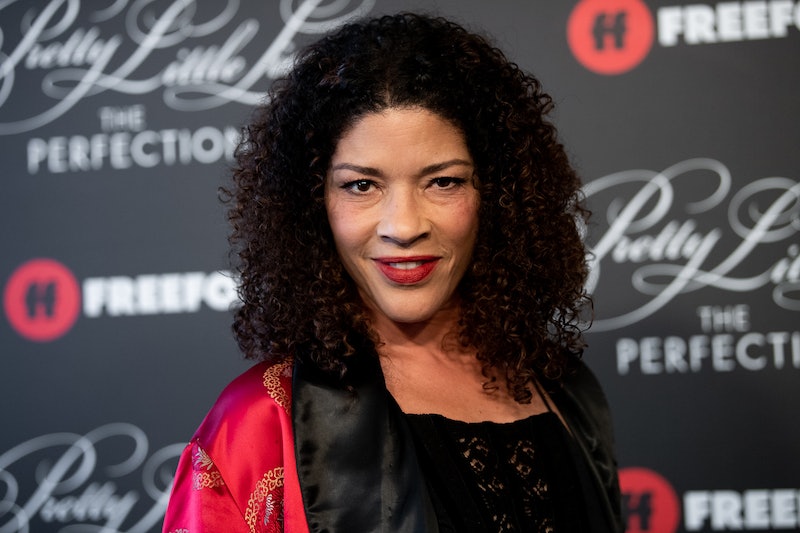 Scott is Dana, aka the new head of security at Beacon Heights University and, according to Deadline, a real thorn in Ali and Mona's sides (there's always one... and on this show, there is definitely more than one.) She is "determined and perceptive almost to the point of omniscience," which used to be Mona's schtick, if you watched the original Pretty Little Liars. It must suck to have the tables turned on you, huh, Mona?

Oh, and if you were a Pretty Little Liars fan, you will probably recognize Scott — she played Jillian Howe on the original series. She only appeared in Seasons 6 and 7, but Jillian was the owner of the publishing company that Aria worked at, making her Aria's boss and the person who opted to publish Ezra's novel. So, I guess they're just not going to explain how that happened, but I can deal with it.

Besides starring on Pretty Little Liars, Scott has had roles on shows like Grey's Anatomy, Criminal Minds, NCIS, Intelligence, Switched At Birth, Millennium, Brooklyn South, and Nickelodeon's amazing You Can't Do That On Television. She's kept pretty busy over the years, but there must be something about I. Marlene King and Pretty Little Liars to keep Scott coming back for not one but two shows.

Since Scott's Dana is the new head of security, we can bet that she'll be doing a lot to thwart Mona and Alison's investigations — but what else can fans expect of The Perfectionists? Sasha Pieterse, who plays Ali, told Vulture that the best part is that even if you're not a Pretty Little Liars fan, you can still follow along. She said:

"When I started reading the scripts, I realized [showrunner I. Marlene King] had done such a good job opening up a new world and keeping all the fun stuff about Pretty Little Liars without copying it or making it feel like everything was going to happen all over again. It’s a very different mystery, and that makes it scarier. Even though Alison and Mona have so much wisdom and discretion with this type of thing, they still don’t know what they’re dealing with or know how bad it’s going to get."

And even though Dana and some other unknown forces may be plotting against Ali and Mona, these two friends are pretty unbeatable. "They’ve been through a lot together. They have an insane history," Janel Parrish, who plays Mona, told Vulture. "They hold each other accountable and are very honest with each other... we're really like an old married couple."

What comes next for the gang at Beacon Heights University? Murder, sex, love, and a whole bunch of lies. But that's just par for the course in the Pretty Little Liars universe.