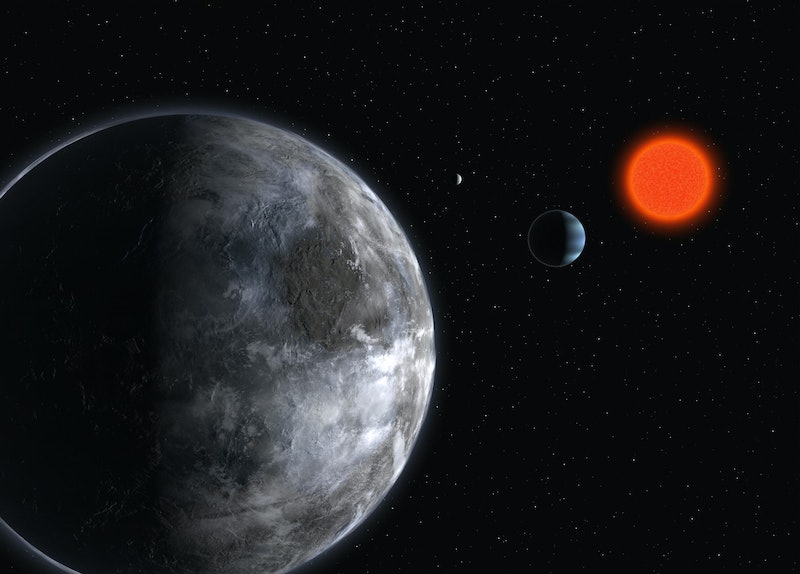 A rogue planet is approaching Earth, and it's going to start a sequence of events that leads to the apocalypse. Or is it a rogue brown dwarf star, surrounded by planets? Either way, it's coming on Sept. 23 — that is, it's coming on Sept. 23 if you believe the latest Doomsday prediction, which is absurd enough to have been debunked by both scientists and men of the cloth.

According to both a man named David Meade and a viral YouTube video, though, that's the date you need to look out for. Because that's when something will happen that has never happened before — a scene straight out of the Book of Revelation. If you don't have time to read through the Bible on your own, the video does it for you, describing how a woman "clothed with the sun" appears in the sky, crowned by nine stars, and then gives birth to a boy that "will rule all the nations with an iron scepter."

Oh, but don't forget the many-headed dragon threatening to eat her child and sweeping stars out of the sky — that's part of the story too. It's all a bit muddled, but the point is that when this scene appears in the sky, that's a sign that the Rapture is coming.

And just to give this prediction the aura of plausibility, those promoting it aren't saying that an actual woman will appear in the sky. Instead, they're trafficking in sky symbols. The woman is Virgo, with the constellation Leo and a couple of planets "crowning" her. The baby in her womb is Jupiter, which Meade claims will leave Virgo's womb area after the length of a human pregnancy. And the dragon, of course, is Satan and his minions on Earth. The video has a very colorful depiction of what the rapture will actually look like, with the faithful suddenly leaving everyone else — and their clothes — behind (including, ahem, a woman named Eve).

The specific event that this series of signs foretells, Meade says, is the arrival of the mysterious planet Nibiru, supposedly a member of the solar system that said to come "dangerously close to Earth" about once every three millennia and therefore unnoticed by astronomers. Nibiru is the mechanism that brings about the end of the world, which will happen over the several weeks following Sept. 23 — or it would be, if it existed.

Just to be clear, Nibiru doesn't exist, either as a rogue planet or a brown dwarf. NASA astronomer David Morrison explained this in a video that, unfortunately, has received far fewer views (only about 12,000) than the doomsday video (more than 2 million).

"It would be bright. It would be easily visible to the naked eye. If it were up there, you could see it. All of us could see it," Morrison said in the video.

Besides its visibility, an object of such great mass approaching Earth would have messed up orbits all around the solar system, including that of the Earth itself. The orbits have stayed just as regular as they were when Isaac Newton witnessed them and studied those very same orbits in the 17th century. You might have even seen a very obvious signal that the Earth and its moon are orbiting as projected, undisturbed by the approach of a massive, dangerous object — the recent solar eclipse, which, incidentally, is also a part of the doomsday theory.

So, that's the astronomical and scientific reasoning behind the argument that the rapture isn't going to happen anytime soon. Oddly enough, though, this time there's also a theological reason why it's all bunk. Meade's conclusion that Sept. 23 is the day when the beginning of the end comes is based on numerology — specifically, on the idea that the solar eclipse was an early sign, and that the apocalypse would begin 33 days after that. Why 33 days, you ask?

Jesus lived for 33 years, and the word Elohim, a Jewish name for God, is written 33 times in the Bible, he specified. If that doesn't sound like the most watertight argument to you, though, you're not alone.

"Whenever someone tells you they have found a secret number code in the Bible, end the conversation," wrote Ed Stetzer, for Christianity Today. "Everything else he or she says can be discounted."

Stetzer isn't just some nobody, either — he's the executive director of the Billy Graham Center at Wheaton College and a pastor himself, so he's kind of a big deal in the evangelical world. When a guy like that says that a prediction is "making Christians look silly," you have to take him seriously.

More than that, though, you should take NASA scientists (and your own eyes) seriously. Or, at least, more seriously than a YouTube video of a shiny woman backed with action movie trailer music. Just like the supposed Mayan apocalypse in 2012 or the Rapture that was supposed to take place in 2011, Sept. 23, 2017 will at most be remembered as a day when a lot of people threw End of the World parties.

And why not? It's always a good day to have fun being alive and celebrate when another pseudoscientific prediction gets proven false.