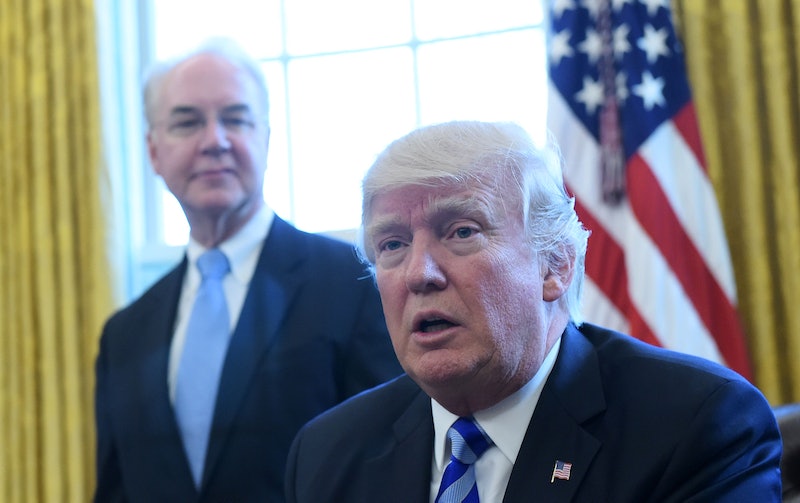 The White House announced Friday that Health and Human Services Secretary Tom Price has resigned from the Trump administration, following the revelation that he spent $400,000 of taxpayer money on private chartered flights between May and September. According to the White House, deputy secretary Don J. Wright will replace Price on an interim basis until President Trump nominates a full-time replacement.

“Secretary of Health and Human Services Thomas Price offered his resignation earlier today and the President accepted,” Press Secretary Sarah Huckabee Sanders said in a statement. “The President intends to designate Don J. Wright of Virginia to serve as Acting Secretary, effective at 11:59 p.m. on September 29, 2017.”

Wright already works at the Department of Health and Human Services, both as Deputy Assistant Secretary for Health and Director of the Office of Disease Prevention and Health Promotion. A former clinician, Wright worked in family and occupational medicine for 17 years in Texas, then joined HHS in 2007. He's been at the department since then, serving in various capacities under Presidents George W. Bush, Barack Obama and now Trump. Wright was also on the National Cancer Institute Advisory Board, and represented the United States at the World Health Organization.

When Trump announced in November that he would nominate Price to serve as HHS Secretary in November, it was widely seen as an effort to bolster Republican efforts to repeal Obamacare, as Price was a strong opponent of the law and had, as a member of the House of Representatives, helped draft several pieces of legislation to scrap the law. But despite Price's health policy bona fides, congressional Republicans failed repeatedly to repeal Obamacare, and it's unclear what influence, if any, Price had on those efforts.

More recently, Price drew criticism after Politico reported that since May, he had chartered expensive, private flights on 24 occasions, all paid for by taxpayers. Some of those trips were between cities that offer much more affordable flights: Polico reported that Price spent $17,760 on a private flight from Washington D.C. to Nashville, Tennessee, even though a commercial flight between those two cities is available for as low as $202 on Orbitz.com.

In addition to this, Price used military jets for official travel overseas during his time in the Trump administration, even though other HHS officials flew on commercial airliners. The cost of these flights was over $500,000, according to Politico, meaning that Price spent over $1 million in taxpayer money on flights over the course of less than five months.

Price's subsequent attempts at damage control were also criticized. He didn't apologize, but expressed "regret" that the reporting had raised "concerns" about his use of taxpayer money. Price agreed to pay for "my portions of these trips," but according to a spokesman for HHS, only shelled out around $52,000, or roughly five percent of the overall cost his flights. In an interview with Fox News, Price called his willingness to do this "a huge demonstration" on his part, and said that he "absolutely" expected to keep his job.

But the kerfuffle appeared to have irritated Price's boss. On Wednesday, Trump openly expressed his irritation with his HHS Secretary, telling reporters Wednesday that "personally, I'm not happy about" Price's use of private jets.

"I am not happy," the president repeated. "I’m going to look at it. I am not happy about it, and I let [Price] know it.”