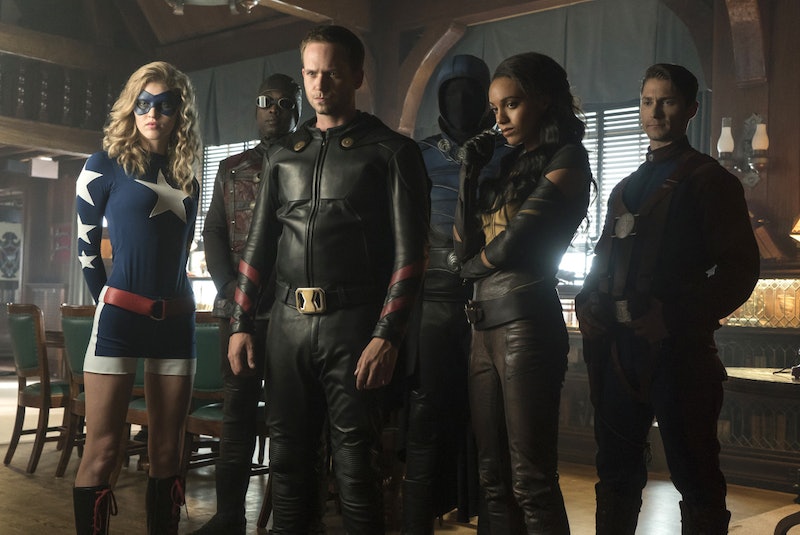 Between keeping track of the Waverider's current crew, the good-or-evil status of Rip Hunter, and the amount of time-traveling antagonists on the Legends' tail, watching DC's Legends Of Tomorrow is like a memory exercise. Add remembering the lineup of the Justice Society Of America to these responsibilities, and the struggle is even more real. In Tuesday's episode "Camelot/3000," a few of the lesser-known (at least to the Legends) members of the JSA show up as the battle for the Spear Of Destiny continues. One of those JSA operatives is Dr. Mid-Nite, played by Kwesi Ameyaw, who was previously assumed dead. Who is Dr. Mid-Nite in DC comics? As a comic book hero with a disability, he's a trailblazer.

But before I get into his background in the source material, I want to recap Dr. Mid-Nite's history so far in Legends Of Tomorrow. He was introduced along with several of his teammates at the very end of the episode "Out Of Time," the Season 2 premiere. The following episode, "The Justice Society Of America," elaborated a bit on the JSA as a crime-fighting fraternity but not much on individual members besides Vixen. Then in "Compromised," Nate and Vixen arrive at the JSA training center to find it abandoned. Dr. Mid-Nite and all of the others were dispatched to Leipzig by President Eisenhower in the '50s and never came back. All were presumed dead.

And now, I presume, Legends will finally explain why the JSA never returned to their home. In "Camelot/3000," the Legends will encounter them scattered across time, all doing their part to guard the Spear Of Destiny, an unspeakably powerful object that cannot fall into the wrong hands. According to the episode synopsis, Dr. Mid-Nite is hanging out somewhere in the future and encourages the Legends to pop over to medieval England, where one piece of the Spear is presumably being held.

Like the rest of the JSA, Dr. Mid-Nite is not an original Legends Of Tomorrow creation. The character first appeared in 1941 in a series called All-American Comics. The first incarnation of Dr. Mid-Nite (or Doctor Mid-Nite) is the alter-ego of Charles McNider, a surgeon blinded by a bomb who learns that his night-vision is extraordinary and pals around with an owl side-kick named Hooty.

The next character to take up Mid-Nite's mantle is Beth Chapel, a doctor who's able to recreate the circumstances that enabled her predecessor to see so keenly in the dark despite being completely blind in daylight. After that, the identity is assumed by Pieter Cross. As a baby, Cross was delivered by McNider during his mother's stressful labor. All three Mid-Nites are characterized by being a part of the medical profession, their heightened nocturnal sight, and superhero costumes marked with a crescent moon.

When you think of blind superheroes, Matt Murdock is probably the first one that comes to mind. But Daredevil made his Marvel comics debut in 1964, decades after DC's Mid-Nite started using his unique abilities to fight crime. It appears as though this JSA member will not be more than a minor character in the Legends universe, but his inclusion in the series is a nod to an important milestone in representation.