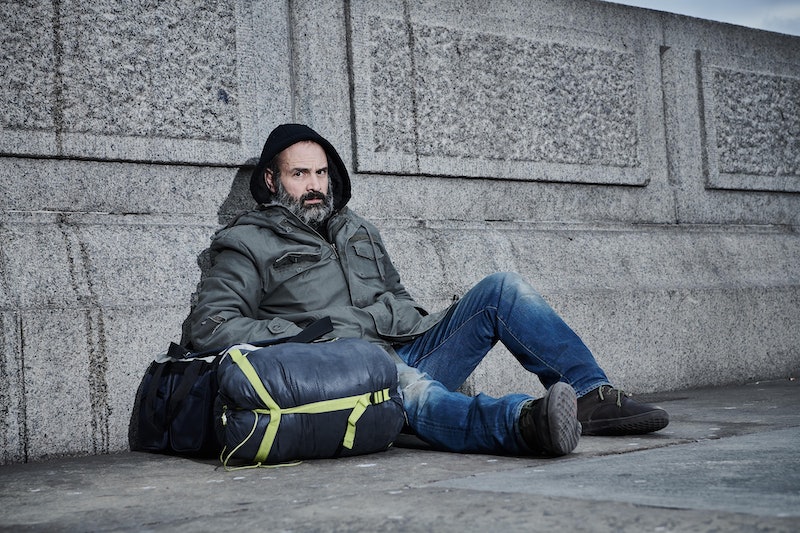 The fact that the job title "explorer" even still exists seems bonkers. Like what box does an explorer tick on various important forms? "Other?" I guess so. Anyhow, Ed Stafford is a bonafide explorer, and his career has seen him walk to the length of the Amazon river and survive a stint on an uninhabited tropical island. However, his latest challenge will take place far closer to home. The explorer will live on the streets of the UK for 60 days in an attempt to understand what homelessness is really like. But who is Ed Strafford? And what led him to this project?

Stratton, an experienced explorer with a military background, has made a business out of his tried-and-tested "60 day" formula. Back in 2013, he was dropped on a remote island where he remained for 60 days. As his official website explains, this challenge involved him "being stranded naked on an uninhabited island for 60 days with no food, water, or tools of any kind to help him survive. He was not even allowed to take any clothes." A four-part documentary was made about his experience, called Naked and Marooned.

Stratton made a name for himself in the adventurer community after he became the first person to walk the length of the Amazon River, in 2010. This earned him a place in the Guinness World Record hall of fame. As his website explains:

"Ed filmed and blogged his deadly journey and engaged followers all over the world for almost two and a half years. His epic adventure made headline news, featuring in over 900 articles and on every major news channel in the UK and United States. Ed’s mission was complete; his tale of true grit, bravery and determination to succeed against all odds has led to him being described by the Daily Mail as, “Britain’s most intrepid hero since Scott of the Antarctic,” and “A true hero” by the Times."

However, as Stratton shared in a chat with the Times this month, none of those challenges were as "daunting" as living rough on the UK's streets. "This was more nerve-wracking. It was quite scary and intimidating walking into it," he told the newspaper.

60 Days On The Streets is a three-part documentary filmed in different places around the UK. Stratton was followed by a camera crew throughout his experience, and he had a security guard within a block's radius at all times. Obviously this didn't provide the same sort of experience as living like an actual homeless person does but, as the Times explains, the attention that the camera equipment attracted meant Stratton needed extra protection.

Speaking about the homeless people he met during his experience, Stafford told the Times: "Most people were in and out of jail, working class, majority white, majority male. I would have loved to come in and smash the stereotype that a lot of them are on drugs, but a lot of them were."

As his website explains, alongside the TV and survivalist work, Ed "is an ambassador for Land Rover, the Scouts, and the Youth Adventure Trust." He is married to fellow adventurer Laura Bingham (best known for leading the first ever attempt to canoe the entire Essequibo River), and the pair currently live in Leicestershire with their son Ran.