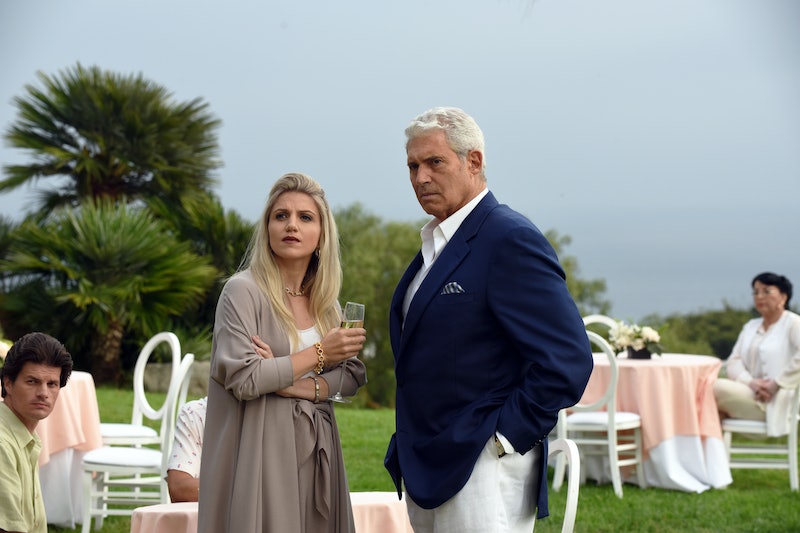 The alleged serial killer Andrew Cunanan is a puzzling figure, and FX's latest installment of the American Crime Story series, subtitled The Assassination of Gianni Versace, attempts to piece together what Cunanan actually was like. One way the show does this is by bringing to life fictionalized portrayals of people who actually knew, and liked, Cunanan. The character Elizabeth Cote, played by Annaleigh Ashford (pictured above) in the series, is one of these people. Elizabeth Cote was a real person who had a long history of friendship with Cunanan.

Not much is known about Cote outside of her friendship with Cunanan. The pair had known each other since junior high school, according to Vanity Fair, and remained close friends into adulthood. Cunanan was even the godfather to Cote's daughter, and the same Vanity Fair profile reported that Cunanan enjoyed playing with his goddaughter, and loved building dollhouses.

But Cunanan was much more than a godfather. Per Newsweek, in 1997, he launched on an alleged killing spree, beginning in Minnesota with former naval officer Jeffrey Trail and Cunanan's ex-boyfriend David Madson. According to Newsweek, Trial had been beaten with a hammer, while Madson died of gunshot wounds. Cunanan later allegedly murdered 72-year-old real estate developer Lee Miglin in Chicago, an act that placed him on the FBI's Most Wanted List, according to the same report. The 27-year-old allegedly murdered once more before assassinating fashion designer Gianni Versace. According to Newsweek, his alleged penultimate crime was shooting 45-year-old cemetery caretaker William Reese in Pennsville, New Jersey.

Despite this long trail of alleged violence, Cunanan initially evaded capture by police, and on July 15 of 1997, Cunanan shot and killed Versace outside his Miami Beach home. After the assassination, Vanity Fair reports that over 12 different law enforcement agencies were on the hunt for Cunanan. The notoriety of his last victim, combined with the particularly gruesome crime scenes he left in his wake, catapulted Cunanan onto the list of America's most notorious serial killers.

Evidently, Cunanan and Cote were close enough friends that the FBI believed that a plea from Cote might convince Cunanan to turn himself in. In a videotaped plea released by the FBI and reported on by The Washington Post, Cote begged her old friend to remember his goddaughter:

"The Andrew Cunanan I know is not a violent person. Andrew, wherever you are, please stop what you are doing ... You still have a chance to show the entire world the side of you that I and your godchildren know. The time has come for this to end peacefully ... Grimmy says she loves her Uncle Monkey and hopes you’ll remember that always. Your birthday will soon be here and the day after, someone else who loves you will be five years old. Please let those be days of relief."

Cote wasn't the only one who saw the sweet side of Cunanan: His siblings Christopher and Elena told the Sun-Sentinel that he "didn't have a mean bone in his body." (Cunanan has one more sibling, Regina Cunanan, who did not speak to the press). But the message from Cote came too late. On July 23, Cunanan's body was discovered in houseboat anchored off Collins Avenue in Miami, according to The Washington Post. He died by suicide and did not leave a note.

It remains to be seen how much of a role the fictionalized version of Cote will play in American Crime Story. It seems likely that her videotaped plea to Cunanan will be dramatized for the show, and that his life as a doting godfather will come into play at some point — if only to set up his fall into alleged serial killer. In any case, the real Cote would probably respect being given her privacy at this time as such a tragic chapter of her life gets dredged up again.

This article was originally published on Jan. 17, 2018