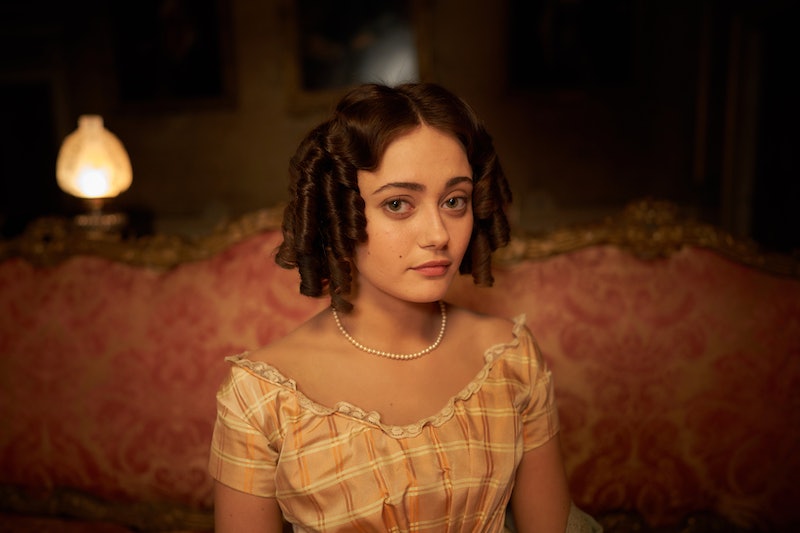 ITV’s Belgravia, the spiritual successor to Downtown Abbey – and also Julian Fellowes' latest work – is already proving to be a success. Set in the 19th century, the series follows the Trenchard family who represent the epitome of London high society. (Read: snobbery and scandalous behaviour aplenty!) Starring in it are a series of big names, including Philip Glenister and Tamsin Greig, but many will recognise the actor who plays Lady Maria Grey. But who is Ella Purnell, and what have you seen her in before?

Fans of Tim Burton’s Miss Peregrine’s Home For Peculiar Children will recognise Purnell immediately as Emma Bloom, the teen who could manipulate air and breathe underwater. She starred alongside Asa Butterfield, who played her love interest Jake Portman. Before that role, Purnell was zapped with the ‘Sick Stick’ by Chloe Grace Moretz in Kick-Ass 2, and landed a lead role opposite Tom Sturridge in Brad Pitt's Starz series Sweetbitter. But her earliest roles were rather glamorous: she played a young Angelina Jolie, in 2014’s Maleficent, a young Margot Robbie, in 2016’s The Legend of Tarzan, and a young Keira Knightley, in 2010’s Never Let Me Go.

Obviously, Purnell is a versatile actor. Her role in Belgravia couldn’t be further from the likes of Miss Peregrine and Sweetbitter in terms of setting. Lady Maria Grey does, however, continue Purnell’s trend of portraying strong women, which she seems drawn to. “This [more feminist period drama] is what we are seeing at the moment,” she told Radio Times, comparing the feminist narrative arc in the show to Gentleman Jack and Greta Gerwig’s Little Women. “If you think about Little Women, which I loved, these kinds of progressive female characters are definitely being written, partly because that is what people want to see: truth, real life.”

The 22-year-old actor also wanted to highlight the importance of playing “a fresh version of this woman from this period,” as she told Digital Spy. “I wanted her to be grounded and intelligent and ahead of her time, and I wanted to play against the stereotype of a ‘period’ woman,” she explained. “There’s a huge upping of period dramas at the moment with some really incredible confident women [...] I really wanted to contribute to that and that movement of positivity.”

Belgravia continues tonight (March 17) on ITV at 9 p.m. You can catch up with the series on the ITV Hub.