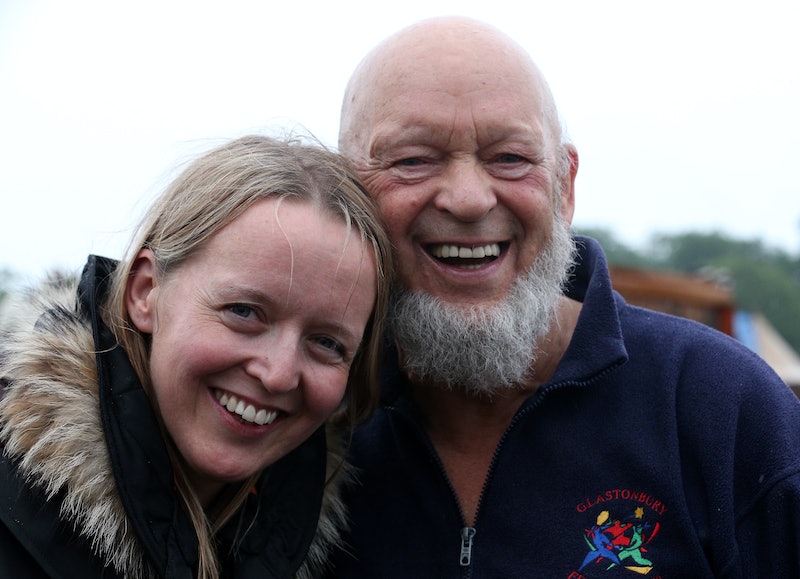 We often take it for granted, but when you think about it, it's quite extraordinary that Glastonbury Festival has accrued a reputation for being one of the most legendary music events in the world, in such a relatively short space of time. Glastonbury Festival has just been a thing that's been around for most people's lifetimes, but while its founder is still around and going strong, he's thinking about what the next generation of Glasto will bring, cue Emily. But who is Emily Eavis, and what's her relationship like with Glastonbury Festival and its founder?

As Somerset Live reports, Emily, born in 1979, is the organiser of Glastonbury Festival. She's also the daughter of Michael Eavis, the man who, according to Culture Trip, created the festival's original incarnation the Pilton Pop, Folk & Blues Festival back in 1970. While she already has a huge involvement with all of the festivals goings on, she's also the heir to Glasto and will takeover one day. "Dad dropped into conversation that I'd be the one to run the festival after him," she told The Telegraph in 2003, adding: "Worthy Farm, where the festival is held, has been in our family for four generations. My dad can still point out trees that he planted as a boy. From the stalls and music, down to the last flowerbed, he's just so involved in it. He's 67 now but far from giving up - and this is his love project."

Putting all 90 acres of Worthing Farm into Eavis' very capable hands should move the festival into a more progressive and gender-balanced direction. Earlier this year, Emily told the BBC that she wanted to see more women headline the festival, but she currently feels that "the pool isn't big enough" to do that. She added: "It's time to nurture female talent. Everyone wants it, everyone's hungry for women, but they're just not there." And while I disagree that there aren't enough high-level women performers — I can think of many incredible examples — I appreciate that Emily wants to nurture more female talent.

"I'm ashamed to say that, within our organisation, there's men who book stages, and quite a few of them are old men and they don't understand why I'm pushing all the time," she also admitted to the BBC site. Alongside her husband Nick Dewey, Eavis is already in charge of booking the headlining acts across the stages, so with any luck we'll start to see some more female talent on the Glastonbury line up very soon.

There was talk of Eavis working on a sister festival to Glastonbury, along with a bunch of people from the Glasto production team. Detailing her plans to Music Week in June, Eavis told the mag that the festival, which is currently operating under the working title 'Variety Bazaar,' might not have its first year for a while, despite previous reports stating that it'd go ahead in 2021.

“That is very much on the back burner for now,” she said. “We have another run of five years here at Worthy Farm, taking us to 2023, and we are just focusing all our efforts on that for now, but I’m always open to new projects. I just don’t quite think anything could replace Glastonbury!”