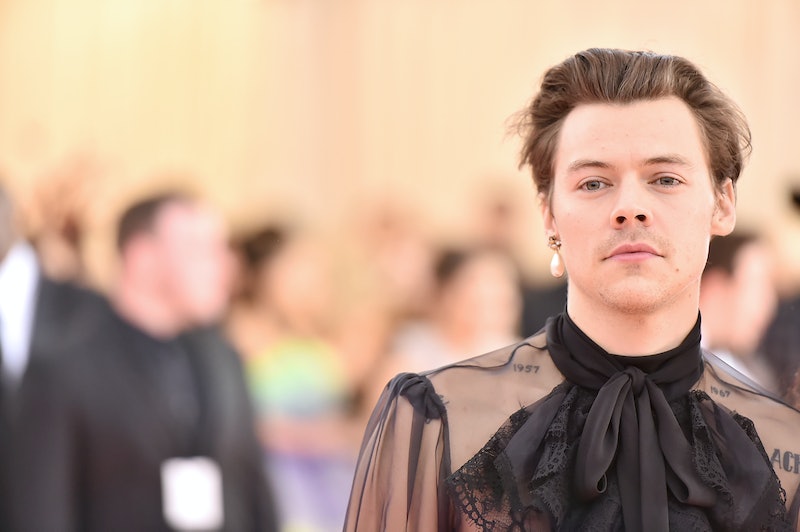 Harry Styles must be protected at all costs. The former One Direction singer dropped his second solo album, Fine Line, on Friday, Dec. 13, and to say he wears his heart on his sleeve would be an understatement. Tracks on Fine Line already has fans in tears over the heartbreaking breakup tracks, and none more so than "Falling," which seems to be about an ex girlfriend.

"I'm in my bed / And you're not here," Styles sings on "Falling." It's clearly about a bad breakup — one that the singer is struggling to fully get over. Styles wrote the song with his frequent collaborator Kid Harpoon. In an interview with Zane Lowe for Apple Music, Styles revealed that he wrote the song in about 20 minutes while reflecting on a time he felt "the lowest I've ever felt in my life." That said, Styles added that the song represented a major breakthrough of self-reflection. "The chorus says, 'What am I now? Am I someone I don't want around?' I had started to feel myself becoming someone I didn't want to be," he said, "and that was really hard."

Given that the song comes right after "Cherry," which features a guest appearance from Styles' ex-girlfriend, Camille Rowe, many fans are assuming that the song is about their relationship. Bustle reached out to a representative for Styles about these theories, but did not receive an immediate response.

Rowe, a French-American model, and Styles were first rumored to be dating in 2017, after they were photographed together in California. The two reportedly split one year later, in the summer of 2018. Though Styles and Rowe never spoke publicly about their relationship, "Falling" might just have revealed the reason for their breakup. "And there's no one to blame but the drink in my wandering hands," he sings on the track.

Regardless of whether or not the song is about Rowe, one thing is clear: "Falling" is making fans *emotional*. "'Falling' by Harry Styles is too powerful. he talks about being alone, the longing for someone. the sadness. the heartbreak," wrote @codeblackjc on Twitter. "the yrics. the vocals. oh god harry let me give u a hug."

If "Falling" isn't about Rowe, then it could be about another famous ex. Styles recently refused to tell Kendall Jenner which songs on his first album, Harry Styles, were about her. So, who knows? Maybe their 2016 relationship inspired more than we know.

More like this
Harry Styles Sent Lizzo Flowers For A *Special* Reason
By Grace Wehniainen
Harry Styles' 'X Factor' Audition Didn’t Start Off As Well As You Thought
By Jake Viswanath
Lil Nas X, Jack Harlow, & Harry Styles Lead The 2022 MTV VMAs Nominations
By Jake Viswanath
Who Is Bad Bunny Dating? Gabriela Berlingeri's Vocals Are Featured On His Song "En Casita"
By Radhika Menon
Get Even More From Bustle — Sign Up For The Newsletter