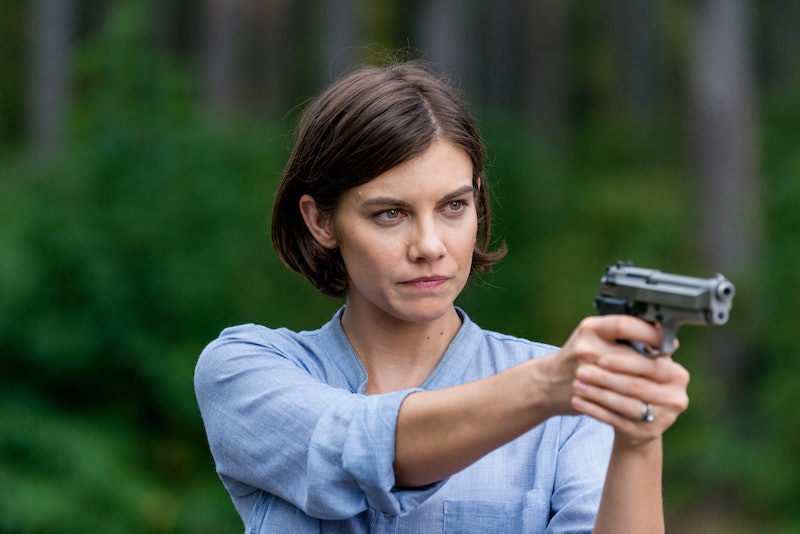 Spoilers for the March 18 episode. Maggie's still discovering what kind of leader she wants to be on The Walking Dead, and a chance encounter in Sunday's episode marks a major milestone. With her people literally starving, Maggie takes a chance and chooses kindness to a fruitful result. Who is Georgie on The Walking Dead? Played by Jayne Atkinson, who you may recognize from 24 and House Of Cards, this charismatic woman has just the values and forward-thinking that the group needs right now.

Maggie, Enid, Michonne, and Rosita encounter Georgie and her twin lackeys Midge and Hilda on the road. It's boys vs. girls this episode, as the mostly male Saviors (facing off against Rick) take over the other storyline. Apparently, these three women are ambassadors for their community who have successfully gained resources for their people in peaceful trade for quite some time. What they trade with them... is knowledge.

No, this isn't some kind of Indiana Jones And The Crystal Skull reference, though Enid and Maggie definitely regard Georgie and her twin guards with the same kind of skepticism one would give the ending to that movie. It's not a meaningless aphorism like "the real apocalypse was the friends we made along the way" or "the truest resource is the love we have for one another" — they actually have valuable knowledge to trade.

What is the knowledge? It's not a secret, or a cure. It's how to build a future, something that everyone is suddenly (yet understandably) quite concerned with this season. As Girls' Hannah Horvath might say, it wasn't the key to the future. It was A Key To A Future, an information packet full of medieval blueprints, irrigation plans, and other ways to build a society without electricity or modern technology. It's a way to start over. Georgie replicated her collected research using a copy shop, somehow, and even used calligraphy on the cover to make it extra fancy.

Here's the description from the cover, as seen in the episode:

"(Being a guide to the machinery, techniques, tasks, travails and SOLUTIONS employed by early civilizations to recent times; let this be the path forward from the past to a more advanced NOW)"

Where are these women coming from? It's clear that they have never met Negan. Bless their hearts, their negotiation tactics would not fly with the Saviors. So they must have come from some distance, as Negan's reach has spread all the way to the shore (per the Oceanside community) at this point.

Could this be The Commonwealth, from the Walking Dead comics? Located in Ohio, this organized community has come into play very recently in Robert Kirkman's graphic series. The community is so large and advanced that they have sports and music facilities. Georgie did mention music in her speech, briefly. There is a George who lives there, and the group is lead by a woman named Pamela Milton who has a similar affinity for blazers. It's where Michonne finds her long-lost daughter Elodie. The group also have some creepy, stormtrooper-like soldiers. If this is the Commonwealth's arrival on the AMC series, Georgie and the gals represent a much chiller faction.

It doesn't seem like Georgie will stick around on The Walking Dead. She does amend her offer to the Hilltop, and leaves the struggling community with food as well as A Key To A Future. It seems like that she and her companions will likely be on their merry way, spreading knowledge and hope for a future with more industry and civilization than endless warfare.

Georgie's offer may have been coincidentally in line with Carl's vision for the future — but the way that all of the Hilltop ladies reacted to her arrival also speaks to how his death has impacted everyone around him. Enid's grief has made her more of a nihilist. Michonne wants to honor her best friend and the hope he represented. Maggie, appropriately, found a balance. Whether Georgie stays or goes, or whoever she is, this could be a clue as to where The Walking Dead is heading — and that future doesn't seem all bad.