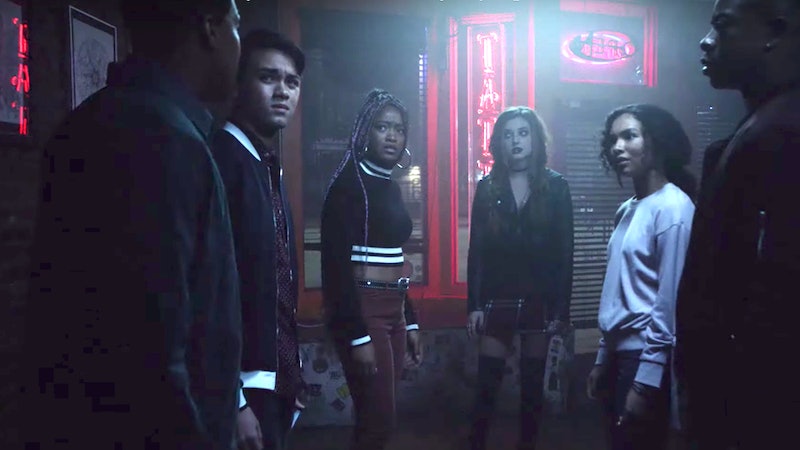 Spoilers ahead for Scream: Resurrection. The "Dead Fast Club" may be the only people aware that there's a masked killer on the loose, meaning it's up to them to find out the killer's identity before they all end up dead. The club doesn't seem to have much in the way of concrete evidence pointing to who the killer is, but their theories about who the Scream: Resurrection killer is have placed their sights firmly within their own circle. And it's actually pretty likely that one of their own is the killer behind the Ghostface mask.

Episodes 3 and 4 do everything in their power to suggest that it's one of the girls in the group, since most of the men have all already been killed (some more brutally than others — R.I.P. Amir). Deion is still alive, but the only way his face is under the Ghostface mask is if his identical twin brother Marcus is alive, which seems unlikely after the revelations at the salvage yard in Episode 3.

That leaves Liv, Kym, and Beth as possible suspects — but there could be some other characters lurking in the shadows that aren't in the Dead Fast Club that could be responsible for the deaths of multiple high school students.

Some of the members of the Dead Fast club seem convinced that Liv is to blame — which would be a subversive take on Beth's declaration that Liv is "final girl" material. However, there's no clear motive for Liv to start killing people.

If Kym's killing people, it may be because she's grown obsessed with the idea of justice, but that doesn't explain why she'd kill her best friend Manny. Beth may be trying to act out her own horror movie, and was mysteriously missing during Manny and Amir's deaths, despite having been in the immediate vicinity. Each of the Dead Fast Club women are deeply suspicious, but there's no one more suspicious or with a clearer motive than Deion's half-brother, Jamal.

The murders in the original Scream occurred because a young man was feeling vengeful after an affair broke his family apart. Similarly, we learn that Jamal and Deion came to live together after their father chose to focus his energy on Jamal's family over Deion's family following the death of Marcus.

If Jamal blames Marcus' death for ruining his life, he may find it fitting to try and ruin Deion's life by haunting him through Marcus.

Of course, even assuming that there's only one killer is a rookie mistake that tricked the town of Woodsboro, California in the original Scream movie. Just as Billy and Stu teamed up in the original Scream, perhaps Liv and Beth are teaming up to take on a world that doesn't seem to understand them. Maybe Marcus is alive and working with Jamal to punish Deion for not being a good brother to either of them.

Whoever's face is behind Ghostface's mask isn't as important as the fact that they won't stop killing people until everyone in Deion's life is dead and that Deion is going to need to step up the next time Ghostface comes around and try to end this once and for all.