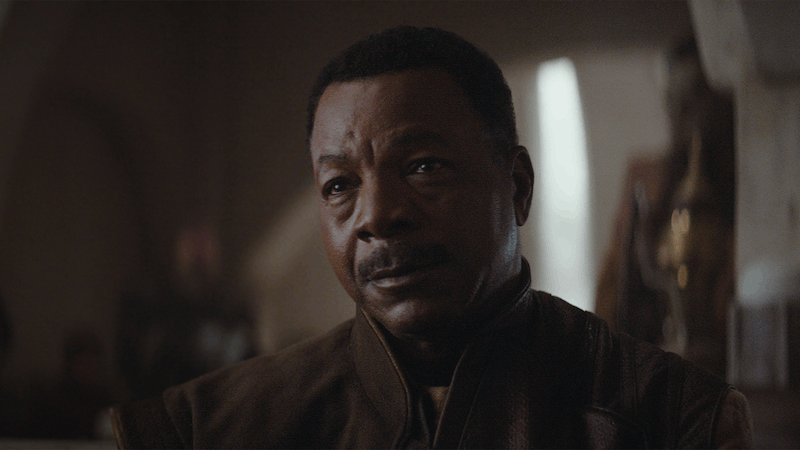 The life of a bounty hunter is never easy. It also means you stand a chance of racking up a fair amount of enemies over the years. And now, thanks to Chapter 3 "The Sin," Mando has now created a major nemesis in The Mandalorian's Greef Carga, played by Carl Weathers, who serves as the leader of the bounty hunter guild. Up until recently, Greef shared an almost friend-like rapport with Mando, giving him assignments whenever he asked and praising him for his efficient work. In fact, it was Greef who sent Mando on his request to obtain Baby Yoda in the first place, which is, ironically, the very thing that has now driven the two characters apart.

After delivering Baby Yoda to his client and collecting a handsome reward, Mando's guilt got the better of him. He rescued the child and is now on the lamb with Baby Yoda in toe — but not before having a major face-off with Greef, who was clearly willing to do whatever it took to give "the asset" back to his client.

Mando shot Greef right then and there, and if it hadn't been for those two beskar ingots in his pocket, he probably would have died. It feels unlikely that Greef will forget that altercation anytime soon — nor will he be willing to let it go.

During a recent interview with Variety, Weathers spoke about Mando's act of portrayal and what his character intends to do about it moving forward. "I think there’s definitely a possibility that Greef Carga has something planned for the Mandalorian," Weathers teased. "I can’t reveal what it is, but we have not seen the last of him yet."

Like so many other characters on this show, Greef is a completely new addition to the Star Wars franchise, which means his storyline could go in any direction without any source material to stick to throughout the rest of the season. But that only makes him all the more dangerous for Mando. He may be a talented bounty hunter (perhaps even the best there is), but as the leader of the bounty hunter guild, Greef has connections everywhere, which may make hiding rather difficult for Mando and Baby Yoda.

As of now it's unclear where Mando is going or what he intends to do with the child now that he's saved him/her from any further experimentations. But now that he's made an enemy of Greef, there journey just became a lot more difficult. Let's hope Baby Yoda is well rested because they could end up needing the Force again very soon.