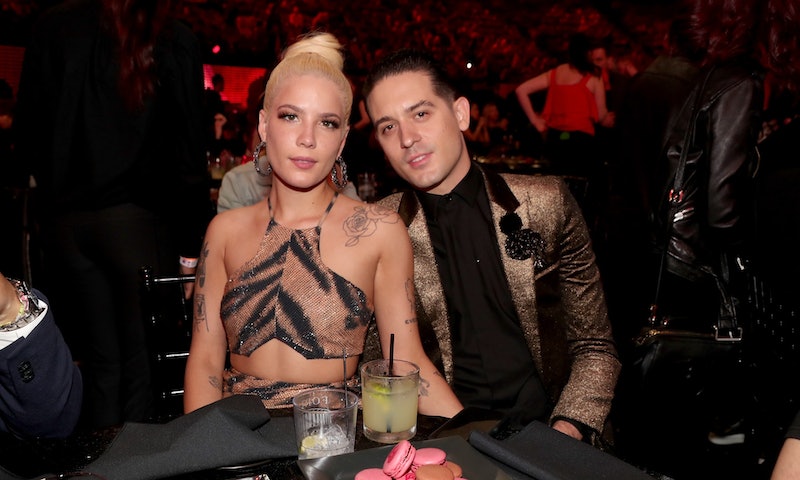 When it comes to public displays of affection, it's no secret that Halsey and G-Eazy's famously on-again, off-again relationship pretty much takes the cake. Well, after reading G-Eazy's birthday message to Halsey, which the rapper shared via Instagram, Saturday afternoon, Sept. 29, it looks like the musician is putting a whole new spin on the PDA concept to ring in Halsey's 24th year of life. In this case, the affectionate gesture wasn't a physical one. (Sorry, no smooching this time.) But rest assured, G-Eazy's message for the woman he fondly refers to as his "queen" still managed to do the trick in terms of making a point about his feelings for Halsey.

"Happy birthday to this one," wrote G-Eazy, kicking off the birthday post's caption before adding, "I love you so so so much and I always will." And if the post's accompanying photo series wasn't enough to have fans convinced that what he's saying is true — come on, look how he's holding her in the second shot — then the rest of his message definitely will. "I myself, along with millions and millions of other people appreciate you more than you'll ever know," he wrote, ostensibly referencing Halsey's loyal fanbase, in addition to himself.

But it was the birthday message's concluding sentiments that really seemed to sum up how G-Eazy feels about the singer. To that end, he continued, writing,

"You're the brightest star in the sky. So grateful to get to travel thru life with you, so happy to call you my queen."

Suffice to say, it sounds like his "queen" — also, can everyone start referring to their significant others like this? — approved of her beau's sweet b-day message. "Best birthday ever," wrote Halsey in the post's comments section, trailing a string of heart emojis. And, judging by Olivia Munn's follow-up comment (consisting of two yellow heart emojis and a shooting star, in that order) it looks like at least one of the duo's famous friends was all about G-Eazy's heartfelt birthday gesture, too.

So is this the bona fide proof fans need to confirm that the famous "Him & I" pair is back in action? Maybe — though it's worth mentioning that neither party has yet to officially confirm anything on that front. Still, G-Eazy's birthday post to Halsey does seem to suggest there's something pretty serious going on between them.

As to what that might be, exactly? Their public appearances over the last month or so have had fans wondering if the "something serious" in question here could be the much anticipated rekindling of Halsey and G-Eazy's romantic relationship. As those fans likely know already, the couple split up this past July, after a little more than a year of dating. Per Halsey's breakup announcement post, which she shared with the couple's enthusiastic fans via an Instagram Story on July 3, it seemed the musically-inclined duo was pumping the breaks on what had been an exceedingly passionate — not to mention exceedingly public — romance.

At the time, she wrote,

G-Eazy and I are taking some time apart. I'm eager to continue the upcoming passage of time dedicating myself to my art and my career, and the duration of my tour.

Of course, it'd be less than two months before relationship rumors would start up again. At this year's MTV Video Music Awards on Aug. 20, Halsey and G-Eazy were holding hands, per some photos published soon after by TMZ. Then, just about two weeks later, during what sounded like a pretty intimate rendition of their sultry duet, "Him & I," at a New Jersey concert right around Labor Day, Halsey and G-Eazy kissed on stage. Their kiss ushered in a fierce wave of excitement (and surprise) from fans who hoped the smooch was a sign that their off-stage relationship was similarly back on track.

Again, it seems important to note that neither Halsey nor G-Eazy has spoken publicly about their relationship at all since the breakup last July. That said, it seems equally important to note that, during that same performance a few weeks back, G-Eazy kindly told the audience to "make some noise for the most beautiful woman on this planet right now" before calling Halsey "a queen" in front of the show's adoring audience.

If his new birthday message to Halsey is any indication, it sounds like G-Eazy is making good use of that particular pet name. While that might not necessarily be the concrete evidence fans need to confirm that the two are, in fact, back together, it's at least good to hear that G-Eazy recognizes Halsey's undeniable queenliness. And, if the weekend's super sincere birthday post is pointing to a rekindled romance, then let's hope G-Eazy reminds her she's a queen every chance he gets — and treats her like one, too.