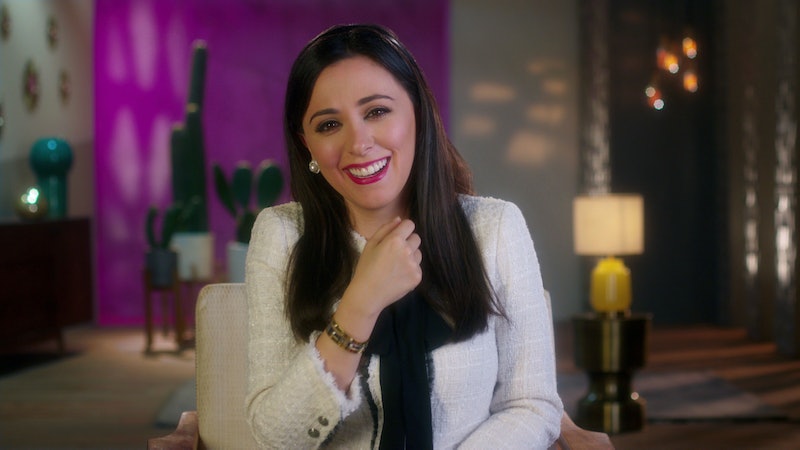 Netflix has transformed the way humans consume entertainment, and the network is about to embark on their newest adventure — its very first reality show. Dubbed Made In Mexico, the show, according to Variety, “casts a light on Mexico City’s wealthy families and their opulent lifestyles as it trails nine socialites and the expats vying for a spot in their rarefied environment.” At least one of those so-called expats, though, isn’t your typical reality star. Who is Hanna Jaff on Made In Mexico? This philanthropist wants to show the world a new side of Mexico.

According to Jaff’s website, she was born in San Diego but spent much of her childhood in Tijuana, where her mother’s family is from. Born of a Mexican Catholic mother and Kurdish Muslim father, Jaff has dedicated her life to helping others, creating the Jaff Foundation For Education and volunteering and living in refugee camps and with immigrants. In an interview with Bustle, Jaff said that her background had “everything” to do with her path in life.

“I chose helping immigrants and refugees because I have friends and relatives that have been both. I’ve not only seen it, but I’ve also volunteered and lived in immigrant homes and refugee camps,” she says. “Once you see that and you feel it and you hear the stories behind every single person, every victim… there’s no possible way you can have discrimination in your heart.”

Her non-profit is focused on, according to its website, “helping refugees, immigrants, and the less fortunate by donating self-taught English learning books” and “campaigning against discrimination” on the basis of, well, anything, really. “It’s my two sides — my father helps refugees, my mother helps immigrants,” Jaff says. “Their result is me. It’s why this charity does what it does.”

Jaff doesn’t seem afraid of a challenge, and her participation on Made In Mexico is, as she says, to boost the world reputation of Mexico and show viewers that it’s a place rich in culture and excitement.

“I think [Netflix] made a good choice [in choosing Mexico] because Latinos and Mexicans, we have a warm-blooded Latin spice that maybe viewers that have seen American and European reality shows may not find in those shows,” Jaff says. “They’re going to see how different it can be… I think [viewers] are going to see a side of Mexican culture and values that you may not have known. I’m happy Netflix decided to do that.”

Jaff has tackled plenty in her life, giving huge speeches and receiving honorary degrees, but she wasn’t quite prepared for the difficulty that comes with filming a reality television show.

“It’s really hard to open up to people you just met… in real life, I’m very independent, I’m very devoted to my career and my work. I don’t really give that much of my time to a party life,” she says. “It was really hard… if I could have changed something, I wish I could have had a friend or two on the show. It would have been a lot easier. Getting to know new people off camera is difficult, but on camera? It’s really hard.”

Also difficult? The Internet criticisms saying that Made In Mexico is simply about Mexico’s elite upper echelons given the income inequality in the country and that most of the cast members are light-skinned and not indicative of the culture at large. A fighter for human rights, Jaff seems to bristle at the notion that her show isn’t for everyone. “I can speak for myself and say it’s not just about [being elite]. We all have problems under our own circumstances. Everybody has issues… whichever your income might be. Everybody does,” she says. “I try to do what I do and be who I am… I know there was criticism, but I think that it’s not about that.”

Jaff also counters that those who complain about the light complexions of the cast members may be doing a bit of generalizing about Mexicans themselves — something that Jaff hopes the show will turn around. “That goes back to stereotypes, you know? If you go to the north of Mexico, they’re blondes. And tall and blue-eyed. And if you go to the south, yeah, they might be darker, they might be shorter, but it’s not like we’re… that really bothers me,” Jaff says. “People generalize Mexicans as being brown, and it’s not like that. You can’t generalize skin color in Mexico. Everyone is different. We’re not all the same color.”

Criticisms aside, Jaff is excited and nervous about her newest venture. When asked to tease any potential plot lines, Jaff exclaims, “I’m not allowed to! And I can’t even say because I haven’t seen it! I’m seeing it the same time as everyone else on TV. I have no idea if they’re gonna put the best of me or the worst of me!” Reality television editing can be a little dicey even for the most pure-hearted cast member, but all Jaff hopes for is the possibility in changing a life. “Success means how many people have a better life because you exist. If you manage to change someone’s life, then you had a successful life,” she says. “It’s not the awards or the diplomas… That’s what I live for."