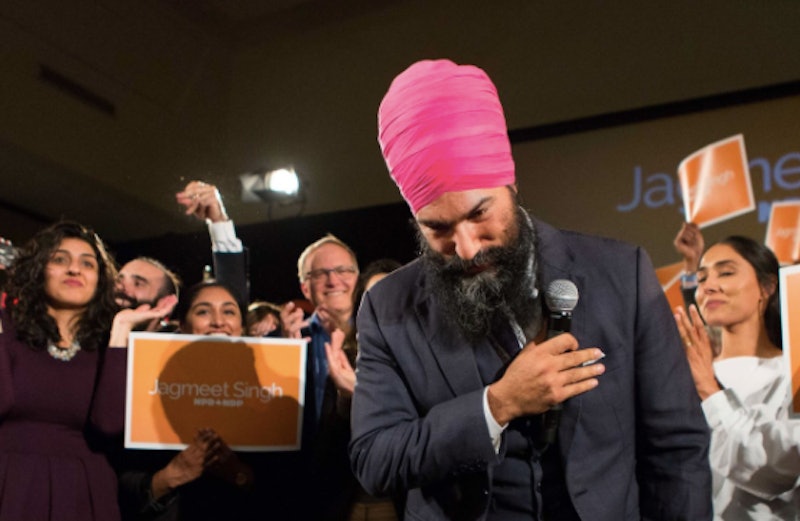 A provincial legislator and Toronto lawyer with limited experience in national politics was voted in as the leader of one of the three major political parties in Canada on Sunday, besting his nearest opponent by a large margin. Jagmeet Singh is now the first nonwhite party leader in the country, ever. He's a Sikh and the son of Indian immigrants, and he's made a name for himself speaking bluntly on issues of race.

That's something he continued in his acceptance speech Sunday, according to The New York Times, noting not only the need to tackle inequality, but also police reform so that people are not stopped by officers because of the color of their skin. He said that forming a government to tackle these issues must be a priority. "To make progress on these issues, to truly make Canadians’ lives better, we owe it to Canadians to form government. We owe it to them," Singh said.

In interviews before and after his win, Singh acknowledged the factor that race had played in his campaign. Singh told National Post that he hoped to inspire a new generation of leaders “who didn’t see themselves reflected in government." His election itself will make that easier. "I’m only here today because people before me have broken barriers," he acknowledged.

Some political movers and shakers in Canada see this as a game changer. New Democratic Party national director Robert Fox explained. "There are so many Canadians who sort of feel that they’ve been on the outside looking in, and he has kicked the door open and said, ‘Come on in,’” Fox told National Post. “And for young brown men and women, for people of color, for Indigenous Canadians, it really gives them a sense of opportunity, of openness, of prospects in 2019."

Race has been an issue for Singh for a time now, both in his personal life and as a politician. The needed police reform, which he mentioned on Sunday in his speech, is something he's dealt with personally. He told Vice in an interview that his dad, after many years working hard in Canada, went out and bought a new car. "And every now and then I’d take it for a spin and, almost without fail, if I took his car I’d get pulled over," Singh told the news site.

If Singh sounds familiar, it's because he recently went viral, both in Canada and internationally, for his response to a racist protestor at one of his events. A woman came into the room and started screaming about sharia law and the Muslim Brotherhood. To be clear, Singh is a Sikh and not a Muslim. He didn't respond with that, though. Instead he responded with messages about love and inclusion. He told her she was loved and included repeatedly. Then he explained to the Huffington Post why:

Many people have commented that I could have just said I'm not Muslim. In fact, many have clarified that I'm actually Sikh. While I'm proud of who I am, I purposely didn't go down that road because it suggests their hate would be ok if I was Muslim. We all know it's not. I didn't answer the question because my response to Islamophobia has never been "I'm not Muslim." It has always been and will be that "hate is wrong."

Everyone's other favorite Canadian politician, Justin Trudeau, wished Singh his congratulations, tweeting, " I look forward to speaking soon and working together for Canadians." Several media outlets noted that Singh can likely keep up with Trudeau when it comes to style (he was interviewed by GQ this year), but Trudeau may still have an edge.

One difficulty that Singh could face is his lack of fluency in French, but that is something the now-Prime Minister candidate is working on.