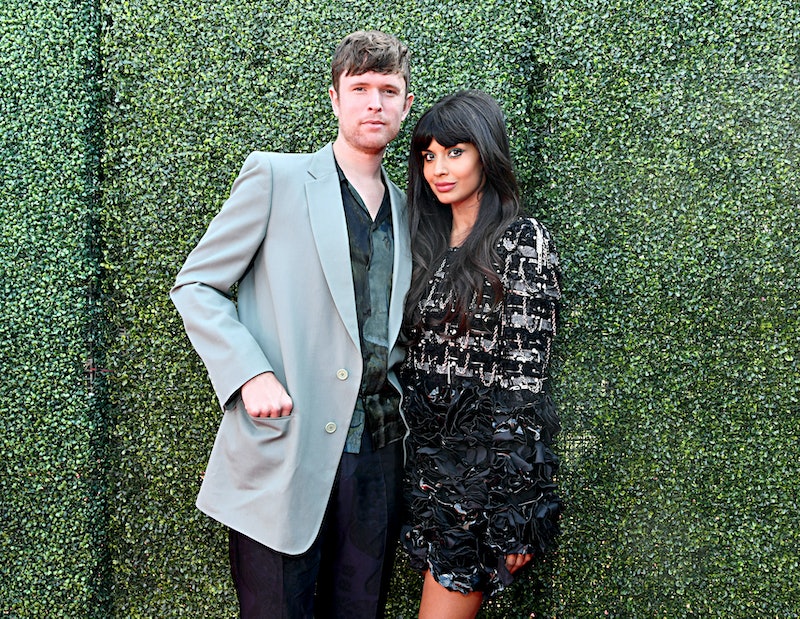 The MTV Movie & TV Awards air tonight and one star-studded couple you'll probably be seeing on the red carpet? Jameela Jamil and her boyfriend James Blake. Jamil has skyrocketed to fame over the past few years both due to her starring role as Tahani on NBC's The Good Place and her outspoken body-positive activism. And Blake is a superstar in his own right — you almost certainly have bobbed your head to the Grammy-winning artist's tunes at one time or another. He won a Grammy for Best Rap Performance for "King's Dead" along with Jay Rock, Kendrick Lamar, and Future, and was nominated for the contributions he made to Beyonce's Lemonade album.

So what's the story with this power couple? They exist in an area of celebrity that's intriguing for more reasons than one. They're neither completely removed from the public eye nor in the front and center of it. They're both happily plugging away at separate projects, one not necessarily more famous or successful than the other. They're not hiding their relationship on social media, nor are they flaunting it in an over-the-top way. And there's no obvious narrative that goes along with their romance — it's not as if they were co-stars or collaborators on any huge projects.

Instead, their relationship appears to have grown pretty organically, and they reveal exactly as much about it as they want. Below, we've cultivated the best timeline we can of Blake's and Jamil's quiet yet poignant romance.

Though he's not tagged (presumably because he didn't have an Instagram account in 2015), this sure does look like the first photo together that Jamil and Blake ever shared. In the caption, Jamil says it's for her birthday. It's unclear how exactly they met, but this must have been taken soon after they started dating — The Guardian reports that they got together in 2015.

Nearly two years later, Jamil posted a photograph of them together in what looks like some kind of art exhibit. They look happy as ever, but are still keeping their relationship a little lowkey.

Jamil shouts out Blake in this photo in late 2017 for caring for her even when he's in a totally different country.

The next year, they're found on Blake's Twitter feed traipsing around Denmark, looking chilly but affectionate.

Jamil posted a shot a few months later for Blake's birthday, showing the two cozying up during a hike.

They still haven't tied the knot as of December 22 — Jamil clarified that in this photo, Blake is holding a big feather fan in front of her, and she's not wearing a wedding dress. Yet!

In the wake of his album's release, Blake thanked Jamil for being his inspiration for the new music in an adorable tweet.

Blake performed alongside his "King's Dead" collaborators at the 2019 Grammys, and Jamil was there to support.

The couple shared a gorgeous view and a dreamy atmosphere in this vacation photo from March of this year.

In their most recent photo on social media, Jamil shared a photo for the couple's four-year anniversary, showing a before-and-after comparison of where they've been, and talking about her journey to loving the top snapshot.

Will the 2019 MTV Movie Awards be yet another addition to the timeline? Fans will just have to wait and see.