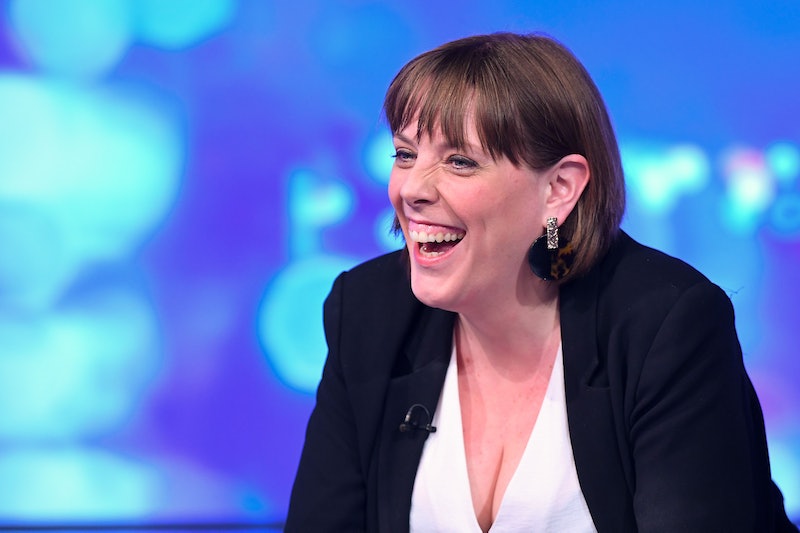 Get ready for some hilariously chaotic baking shenanigans, because Celebrity Bake Off For Stand Up to Cancer is back with a line-up that is — dare I say it — even better than last year's. And while I'm totally buzzing to see how Rylan Clark-Neal and Big Narstie will fare in the Bake Off tent, I'm so excited to see an empowering Labour MP wow the judges. So who is Jess Phillips, and how did she end up as a contestant on Celebrity Bake Off?

Phillips was born and raised in Birmingham, and before beginning a career in politics, she worked for domestic abuse charity Women's Aid, as The Guardian reports. She started as a PA in 2009, and went on to spend "five years working for Women's Aid supporting and defending women," the charity states on their site. Her efforts to campaign for and give support to those effected by domestic abuse led her to become a Labour councillor, before she was eventually elected MP for Birmingham Yardley in 2015.

Phillips has said that her aim is to make politics feel more "normal". "I had one goal and purpose when I stood. Premeditated and thought through, definitely," she told The Guardian in 2017. "I wanted to be an MP who was normal. I believe in politics, I'm a proud parliamentarian, and I want people to want parliamentarians again."

She continued: "I think the most important thing I can do in my time there, which may well be very short, is for people to say, 'Oh, look, they are just like us.' To make people feel like politics is about them again. So I decided I would stand, and just say and do exactly what I actually thought."

And boy did she. Referred to as the "Rizzo of parliament" by fellow MP Stella Creasy according to the Guardian, Phillips is known for being very outspoken when it comes to representing her constituency and sharing her beliefs. I mean, all you have to do is take a scroll through her Twitter to find her highlighting important issues in parliament, completely shutting down trolls or providing hilarious insights into her family life.

Not only that, but two years after becoming an MP she also published her first book titled Everywoman: One Woman's Truth About Speaking The Truth in 2017. If you're as enamoured by her passion and outspokenness on Twitter and in the commons as I am, you need to pick up this book.

"[Y]ou might already know me as the gobby MP who has a tendency to shout about the stuff I care about," Phillips wrote in a description for the book. "By demanding to be heard, dealing with our imposter syndrome, by being cheerleaders, doers not sayers, creating our own networks and by daring to believe that we can make a difference, we can. We're women and we're kick-ass. And that's the truth."

Now if that isn't a manifesto to live by, I don't know what is.