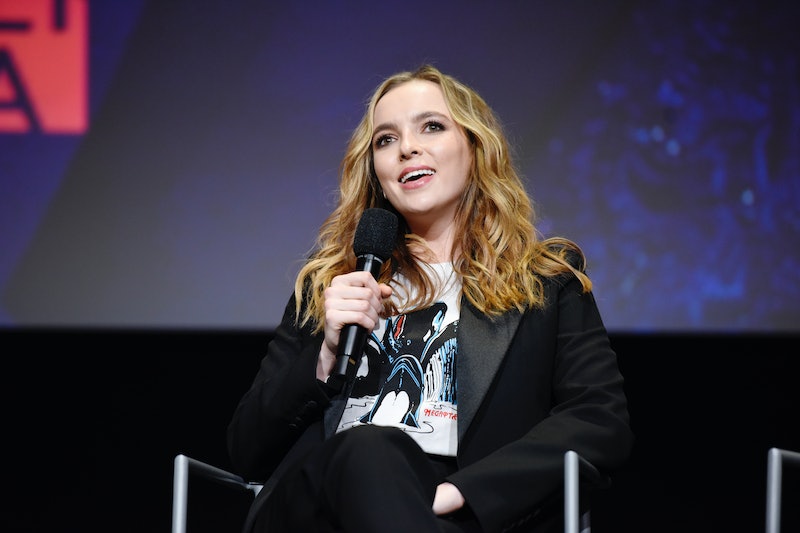 No, there's still no news of a UK release date for the second season of Killing Eve. As horrible as the wait is (especially when it's available across the pond) at least it gives you ample time to learn about the actors in the show, especially Jodie Comer who plays the now iconic Villanelle. The 26 year old has already had quite the career, but what about her life behind the scenes? Who is Jodie Comer dating?

During an interview with the Telegraph last September, Comer gave some insight into her life outside of acting, which mainly takes place back in Liverpool, where she lives with her parents and brother. "I honestly can't imagine not living with my mum and dad. I'm trying to postpone it for as long as possible," she said. "I like having these two words — I get to travel and visit cool places, but then go back to reality." While mentioning that the majority of her friends still reside in her hometown, she mentioned how her boyfriend has reacted to her acting career.

"My friends are in Liverpool, I have a boyfriend in Liverpool. He isn't in the industry so this is an interesting job for him to understand."

That made me curious (obviously), so I went to have a little peak on her Insta and Twitter but sadly couldn't find any pics of her and her beau (which, TBH, I don't blame her for). Although, there are tons of snaps of her and her brother Charlie, who she referred to as her BFF to the Telegraph. Who doesn't stan a strong sibling bond?

"The family are really pleased for me, especially my brother. He is my best mate; he is two years younger than me and I care more about what he thinks than anyone else. Whatever happens, I can't upset our Charlie."

I have a feeling that Comer has never let her brother down with the roles she's portrayed over the years. The actor started her career at fourteen-years-old after winning a monologue recitation competition at the Liverpool Drama Festival, which then led to her first television role in ITV hospital drama The Royal Today according to BT. From there she became recognised for her role on the E4 series My Mad Fat Diary, but it was her portrayal of "the other lover" on Doctor Foster in 2015 where she started to be recognised for her work.

But it was her role in Killing Eve that would garner Comer the most recognition after became one of 2018's most talked about series. It was renewed for a second season before the first even aired — that's when you know a show is going to take the world by storm. "If you look at other shows, it is always male-female; male killer, female detective," Comer told The Guardian last December. "It's strange how, if you put two women in those roles, the narrative shifts. It's something we've never seen before and there's something fascinating about it. Because women are so in tune with their emotions."