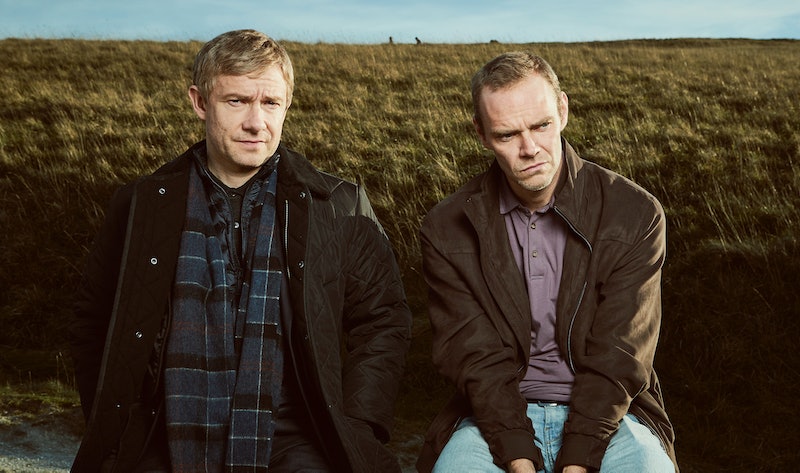 If you’re a lover of anything true crime and in need of a new drama series then you should definitely tune into ITV’s A Confession. The thought-provoking, chilling drama tells the true story of a detective on the hunt for a missing 22-year-old girl. He couldn’t anticipate what he’d uncover and it’ll have you on the edge of your seat. The cast is jam packed with A list British actors and you’ll definitely recognise the series prime suspect. So, who is Joe Absolom? He’s starred in many of the shows which make up the cornerstones of British TV and his performance in A Confession is positively chilling.

Fans of true crime have been gripped by ITV’s new series A Confession which is based on a true story. The series follows Detective Superintendent Steve Fulcher (played by Martin Freeman) as he tries to work out where missing 22-year-old Sian O’Callaghan is after she disappears on a night out. His investigations draw him to having to make the decision between following the rules of breaking police protocol in a bid to find her. Viewers have been introduced to the main suspect, taxi driver Christopher Halliwell and if you recognise the actor playing him it’ll be for good reason. Joe Absolom has played leading roles in some of the most recognisable TV shows.

Absolom’s career spans almost three decades but he is perhaps most known for his role in Doc Martin. He’s played the character Al Large in the series opposite Martin Clunes for 15 years, between 2004-2019. No stranger to ITV crime thrillers, Absolom played Shay Nash in the first series of The Level in 2016. He’s also had roles in Midsomer Murders, Death in Paradise, and Ashes to Ashes so to say he knows his way around a crime drama is an understatement.

While you may recognise him as a super helpful handyman in Doc Martin or crime thriller specialist, earlier in his career Absolom had a role in one of the most famous UK TV shows. Between 1992-2000 he played Matthew Rose in Eastenders and to say he got some dramatic storylines is an understatement. He had the nation talking as his character was framed for a murder he didn’t commit and was wrongfully imprisoned.

Speaking to Bradford Zone about his new role as Christopher Halliwell he said, “I was nervous at the script read through mainly due to the quality of the actors and what they’ve all done in the past. I sat next to Imelda Staunton at the read through. Every line she delivered was just perfect.” He continued:

“Much as I don’t like Halliwell, you have to immerse yourself in his world. I ingested some of his odiousness. It affected me. At the end of the day it stuck with me. It was getting to me in a way that other roles haven’t. I found out a lot about Halliwell which was helpful for playing the part. But it didn’t help me sleep at night.”

If you’re a fan of true crime then you have to see Absolom’s seamless performance in A Confession. A chilling storyline which will have you in disbelief that it’s true, it’s gripping. A Confession is on ITV tonight (Sept. 16) at 9 p.m.