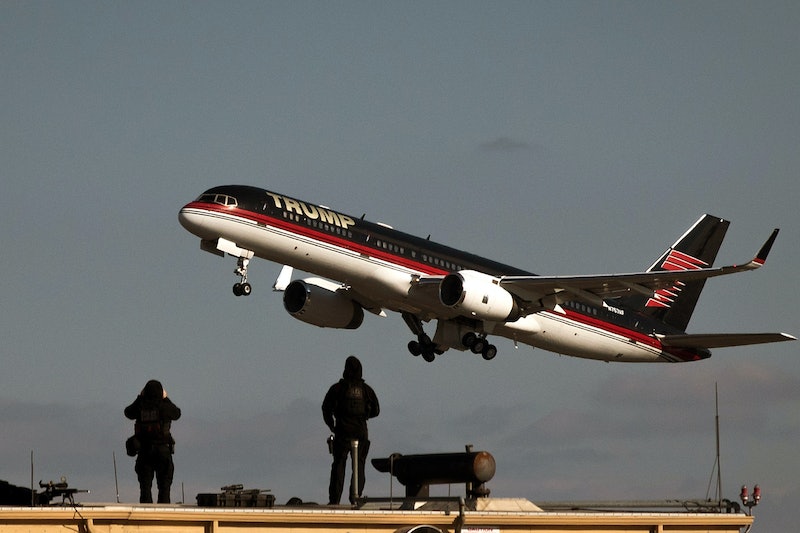 The head of the Federal Aviation Administration (FAA) doesn't often make headlines, and neither do the people in the running to step into that position. However, you will want to know who John Dunkin is, because he's he's reportedly up for consideration as the new head of the FAA — and he's Trump's personal pilot.

This report, which originally came from Axios, immediately began turning heads as another potential case of Trump bringing members of his staff from his pre-presidential life with him into government. However, an anonymous source in the administration told Axios that Dunkin, in addition to being Trump's longtime personal pilot, is also highly qualified for the position.

CNN Money reports that Dunkin started flying at age 15 and has been at the head of Trump's fleet since 1989, While he's qualified to fly any of the aircraft in Trump's fleet, Dunkin wrote in the magazine Professional Pilot that he most often pilots Trump's flagship 757. As Trump's main pilot, he also handled all of the aviation operations for Trump's presidential campaign — which was no walk in the park.

He's managed airline and corporate flight departments, certified airlines from start-up under FAA regulations, and oversaw the Trump presidential campaign's air fleet, which included managing all aviation transportation for travel to 203 cities in 43 states over the course of 21 months.

Bustle reached out to the White House for a comment on this story, but they did not respond immediately.

As Dunkin describes in his piece for ProPilot, managing aviation for the Trump campaign was a significant undertaking.

"Candidates that run for President normally hire an entire airline but that is not how we roll. Our flight department consists of a Boeing 757, Cessna Citation X and 3 Sikorsky S76 helicopters," Dunkin wrote. "Our flying staff at the time was made up of only 2 full-time fixed-wing pilots including myself and 2 full-time helicopter captains."

He then describes how between them, a barebones ground staff and cabin crew, and two addition pilots who were brought on, they managed to coordinate everything for the entirety of the campaign. Flying a presidential campaign, Dunkin wrote, "was one of the most incredible experiences of my aviation career."

Trump has spoken of his regard for Dunkin before, specifically at a 2017 meeting with airline executives. "I have a pilot who's a real expert," Trump told the assembled executives. "My pilot, he's a smart guy, and he knows what's going on."

Dunkin has reportedly already interviewed for the FAA head position, and Axios' Trump administration source told them that he came across as an impressive contender.

Trump's air travel as president now happens on Air Force One, but Dunkin spoke to Trump and others about the FAA before handing over the reins. When he'd find Trump's plane delayed on a runway, he would tell Trump and others that having a pilot at the head of the FAA would fix that problem. The acting FAA Administrator is Dan Elwell, who took over after Obama appointee Michael Huerta's term ended in January. Elwell, in addition to having worked his way up through the FAA over several years, is also a former pilot. Elwell is also up for the position, as is Republican Rep. Sam Graves, a member of the House Committee on Transportation and Infrastructure who also sits on the aviation subcommittee.