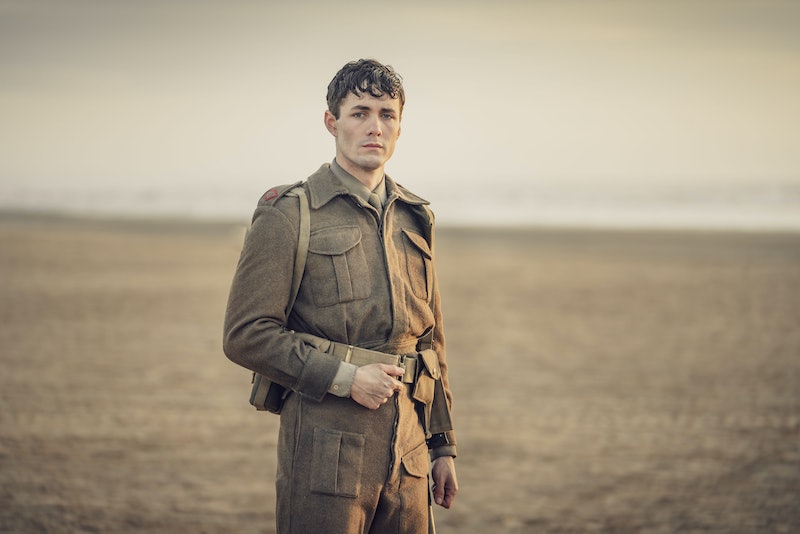 The realties of life during the second world war are portrayed in the BBC's newest Sunday night drama, World On Fire. The series focuses on the lives of ordinary people who were greatly effected by the devastating events of the war, and stars the likes of Jonah Hauer-King, Helen Hunt, Sean Bean, and many more. But who is Jonah Hauer-King? Here's everything to know about the World on Fire actor.

According to his official portfolio, Jonah Hauer-King is a British actor who has recently starred in a string of cinematic releases, including a leading role in A Dog's Way Home, and the 2019 drama film Song of Names opposite Tim Roth and Clive Owen. According to Empire, Hauer-King is also set to appear in the upcoming U.S. flick Once Upon a Time in Staten Island alongside the Oscar-nominated actor, Naomi Watts.

Speaking to Cambridge Magazine, the actor revealed that he grew up in North London, and is a dual UK-American citizen. In addition to his latest TV gig on the BBC's World On Fire, Jonah has also previously starred on the U.S. series Little Women, and the BBC adaptation of Howards End.

In BBC One's latest Sunday night offering, Hauer-King will portray the character of Harry Chase — a translator who works for the British embassy in Warsaw. According to the Radio Times, Harry's complicated love life, which is torn between current girlfriend Lois (Julia Brown) and his Polish love-interest Kasia, becomes a focal point of the series. Speaking of his character's World on Fire storyline, the actor revealed, "When we meet him we learn that he’s fallen down the rabbit hole of falling in love with two people. It’s not so much an affair as it is being in a strange position… Harry has a lot of good intention and a lot of love and compassion in him. But at the beginning of the series he’s also deeply flawed so I don’t want to defend him too much!"

According to the BBC, World On Fire is an "adrenalised, emotionally gripping and resonant" drama which follows the first year of World War II. The series will focus on the "intertwining fates" of regular people, who must grapple with the effects of the war throughout their everyday lives.

As reported by The Sun, show-creator Peter Bowker previously revealed that the series is based on the experiences of real people, and went into further detail about how World On Fire manages to accurately depict their stories on-screen. Speaking about the production process at the drama's launch event, Bowker revealed, "They have diaries, and because of the Mass-Observation (which recorded everyday life in Britain) that went on at the time, a lot of people were encouraged to keep a diary about how they felt. So there’s a massive archive (that we used).

World on Fire begins on Sunday, September 29 at 9 p.m. on BBC One, and due to the show's historical authenticity, the series will hopefully honour the stories of those effected by the harrowing events of the war.

More like this
The Sean Bean Intimacy Coordinator Controversy, Explained
By Sam Ramsden
At 28, Lesley Manville Was Acting, Picketing, & Singing Kate Bush Songs
By Olivia-Anne Cleary
Stephen Graham’s Wife Plays A Vital Role In His Career
By Emma Madden and Sophie McEvoy
Prince Charles Revealed What He *Really* Thinks Of 'The Crown'
By Sam Ramsden
Get The Very Best Of Bustle/UK