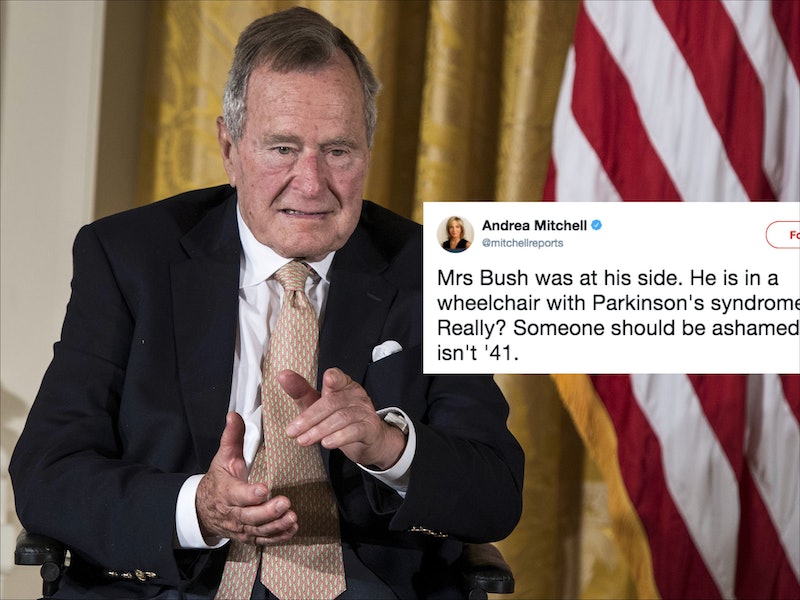 As of this writing, two women have stepped forward to accuse former president George H.W. Bush of groping them. And, as with any public accusation of harassment made by a woman against a man, some observers are reacting defensively — that's to say, defending the senior Bush. Although even his office admits that H.W. did touch women's rear ends in a "good-natured manner," people are still finding a way to blame the victims.

Take NBC anchor Andrew Mitchell, for example, who wrote on Twitter: "Mrs Bush was at his side. He is in a wheelchair with Parkinson's syndrome. Really? Someone should be ashamed and it isn't '41."

The two actresses who spoke out about being groped, Heather Lind and Jordana Grolnick, both claimed that H.W. told them a "dirty joke" and touched them inappropriately in public. “They warned us, he gets pretty handsy,” Emma Sohlberg, who says she witnessed Grolnick's experience, told HuffPost.

It's difficult to defend the actions of a man who openly admits to sexually harassing women, whether with "good nature" or otherwise. Yet, both before and after George H.W apologized, NBC's Mitchell and others suggested that the women making the accusations were at fault. (The ex-president's office said in a statement: “At age 93, President Bush has been confined to a wheelchair for roughly five years, so his arm falls on the lower waist of people with whom he takes pictures. To try to put people at ease, the president routinely tells the same joke — and on occasion, he has patted women’s rears in what he intended to be a good-natured manner. Some have seen it as innocent; others clearly view it as inappropriate. To anyone he has offended, President Bush apologizes most sincerely.”)

Those defending George H.W. Bush cite several reasons why the women involved, and not George H.W., are at fault. Primarily, as H.W. alluded to in his statement, the fact that the former president is in a wheelchair and has a form of Parkinson's disease. Other observers also cite his wife standing beside him during at least one instance when the touching occurred, the fact that a side effect of Parkinson's can be hyper-sexualized behavior, or that H.W. is in his 90s and is a respected former president.

And, of course, there's the common refrain that women who accuse men of sexual misconduct are just "looking for attention."

Sadly, it's not news that many people prefer not to believe women when they speak out about being assaulted. What is surprising is that even though George H.W. Bush openly agrees that he groped women, his supporters continue to attack those women.

I can't believe I have to say this again, but here we go: There is no excuse for sexually harassing or assaulting a woman, ever. When we make excuses for the men who engage in this predatory and illegal behavior, we perpetrate a culture that permits sexual assault without consequence. When we don't believe women, we implicitly prevent other women from speaking out about their experiences of being assaulted.

Yes, George H.W. is old; yes, he has a form of Parkinson's; yes, he is in a wheelchair. However, unless we consider George H.W. unable to control his own behaviors, he must be held accountable for every instance of sexual harassment. You can speculate about "hyper-sexuality" and side effects of medications, not to mention H.W. just being "old," but I'll say it again: There is no excuse for sexual misconduct. There is no reason it can be shrugged off.

This is not about George H.W. Bush. It's about the legions of women who have bravely spoken up about being assaulted and had their stories torn into, their reputations dragged through the mud, their motives questioned.

Yes, Bush Sr. admitted that he groped women, but plenty of men who have been accused of sexual misconduct have denied it — don't forget that Bill Cosby is still a free man, and that the longtime allegations against him didn't have any impact on his career until 2014 — and plenty of women have not been believed, thanks to a culture and a legal system that is weighed against the victim. Each time we excuse away behavior like Bush's, we make life easier for the men in power who abuse women sexually, and we make life more unbearable for their victims.