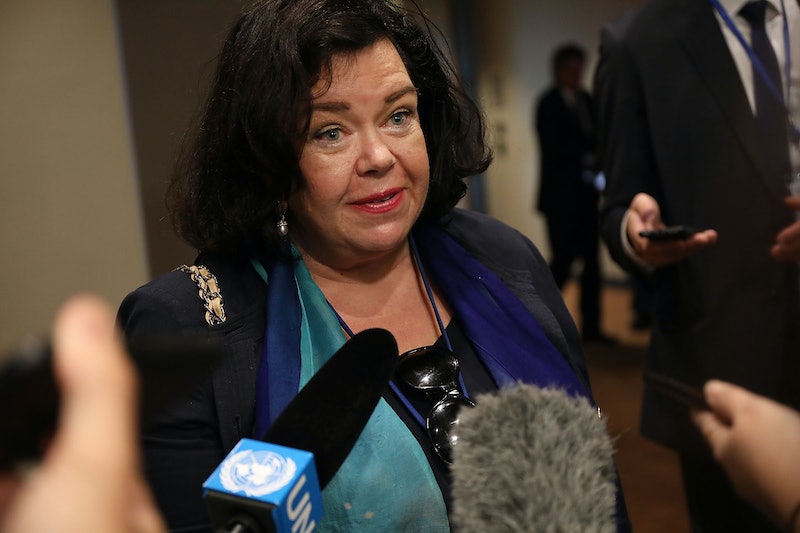 "Direct", "no nonsense" and "resolute" are just some of the words journalists and colleagues have used to describe the indomitable Dame Karen Pierce, the UK's permanent representative to the United Nations. Today (Feb. 7, 2020) the diplomat has been appointed Britain's ambassador to Washington, becoming the first woman to ever hold the position. But who is Karen Pierce, and what do we need to know about her?

UK ambassador to the U.S. is considered one of the highest positions in the diplomatic service, and will see Pierce attempt to restore the UK's frayed relationship with the United States and the president.

"I can't think of no better person to drive forward our hugely important relationship with the United States at this time," said Prime Minister Boris Johnson about the new appointment, via BBC.

Having begun work in the Foreign Office in 1981, Pierce has held posts all over the world including becoming the British ambassador in Afghanistan between 2015 and 2016.

From her optimism about post-Brexit Britain's position on the world stage to her choice in outfits, Dame Karen is no stranger to making headlines. In a time when women in politics are needlessly criticised for their clothing, Pierce is refreshingly resolute. Famously, in response to Russian reports about the now renowned red feather boa she wore to a UN security conference, she said:

"The Russians put in the press that I had a penchant for very expensive rare exotic furs implying that there was something illegal ... Actually our answer was very simple: it’s fake fur and this is fake news. It cost me five pounds off the internet."

Dame Karen's trajectory to her historic new position would appear destined. Originally from Preston, Pierce had decided on her career at the age of 12 after seeing a picture of diplomat Eleanor Wicks, one of few African American women who served in senior roles abroad for the U.S. State Department in the early 1970s.

In a interview with the Guardian she said (via the Spectator): "There was something very compelling about the photograph, arresting blue sky, dark blue sea, grey aircraft carrier and this fantastic woman was dressed in white so the image was very compelling and then I went and read the story and it explained what she did and I thought that sounds like a fantastic job."

Following the announcement of her new role, Pierce said in a statement: "I am honoured to have been asked to represent the UK in the U.S. I think it is the UK's single most important relationship. There is a deep bond between Britain and the U.S., built on many pillars."