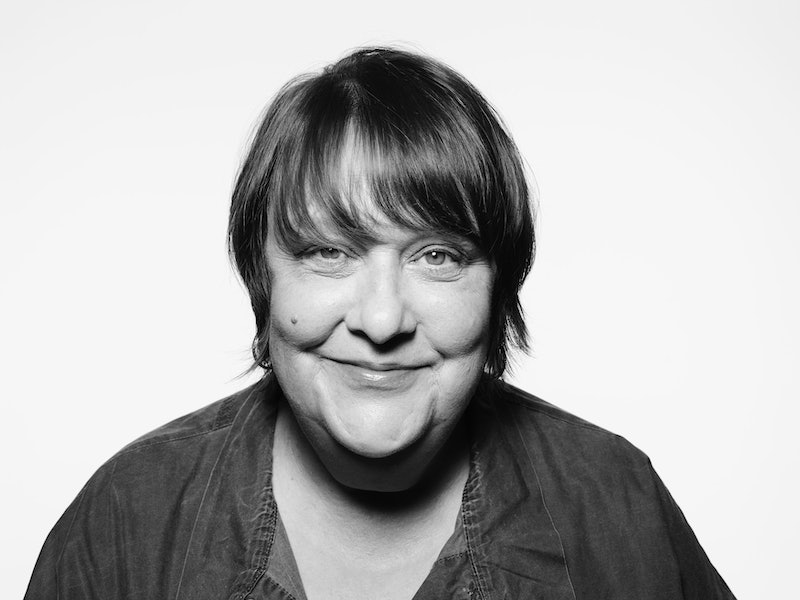 The Channel 4 documentary series All Woman explored what it means to be a woman in 2019, and touched upon subjects such as motherhood, plastic surgery, identity, feminism, love, and sex. The docuseries is fronted by Kathy Burke, who you might recognise from a variety of other film and TV stints. But who is Kathy Burke? Here's everything you need to know.

As her official website notes, Kathy Burke is a British actor with an impressive portfolio of work in television, theatre, and film. According The Sun, the actor was born in Hampstead, London, and later moved to Islington. Burke first got the acting bug at the age of 16 when she began attending the Anna Scher drama school in her hometown of Islington — and just a year after enrolling, the All Woman host bagged her first ever acting gig. However, Burke's star didn't begin to rise until her appearance in Harry Enfield's Television Show, which led to a string of other major comedy roles in shows such as French & Saunders, Gimme Gimme Gimme, Harry Enfield's Chums, and more.

As previously mentioned, Burke is also no stranger to the world of film, and has appeared in major releases including Kevin & Perry Go Large, Absolutely Fabulous: The Movie, Tinker Tailor Soldier Spy, and according to the Independent, Burke received critical acclaim for her leading role in the 1997 drama, Nil by Mouth, which went on to bag the actor a Best Actress award at the Cannes Film Festival.

Burke's latest TV venture arrived upon the debut of her Channel 4 series, All Woman. According to iNews, the three-part documentary series sees the award-winning actor, writer, and director set out on a journey to discover what it really means to be a woman in 2019. Burke, who is well-known for her outspoken approach to life, offers her unique take on the issues faced by modern women, including sex, surgery, and feminism — and throughout the series she enlists the help of many familiar faces, including the likes of Love Island star Megan Barton Hanson, TV host Caroline Flack, the Oscar-winning actor Samantha Morton, and more. If you missed this insightful series, theres no need to worry, because All Woman is now available to watch in its entirety on All 4.

Prior to the debut of All Woman, Burke opened up about her own struggles with going through menopause, and discussed why she opted to never have children. During an interview with the Mirror, the actor revealed, "The menopause is probably the biggest b*****d amongst the female anatomy. Your hormones go apesh**. What happened was I became quite isolated because I didn’t want to go anywhere because I hated being a woman during my menopause. I was like 'why am I a woman?'. I couldn’t bear it."

Burke's willingness to discuss her own experiences of being a woman is precisely why you have to check out her most recent work, and you can catch all three episodes of All Woman on All 4 now.