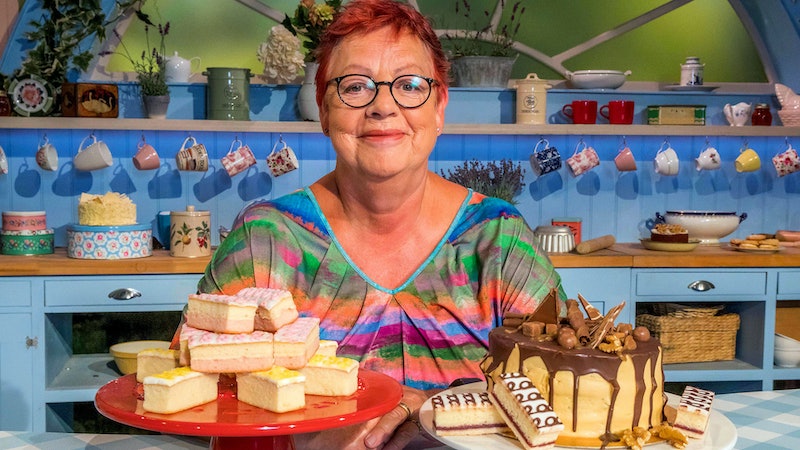 Fans of the delicious Great British Bake Off are no doubt basking in the glow that news of the show's imminent return has brought, because our favourite televised baking competition is back for a landmark 10th series. Upon the show's return, judges Prue Leith and Paul Hollywood will once again preside over some of Britain's best amateur bakers, and Noel Fielding and Sandi Toksvig will also be back to host the award-winning series. However, some fans might also be anticipating the return of Bake Off's tasty spin-off. So, will Bake Off: An Extra Slice be back for 2019?

According to The Sun, the Channel 4 spin-off will indeed be returning to our screens in 2019, and if Extra Slice follows the same schedule as last year, we can expect to enjoy the first episode on Friday, August 30. As reported by the newspaper, comedian Jo Brand is expected to reprise her hosting duties, however, there has been no official confirmation in regards to her return. I have reached out to Channel 4 for comment, and will update with any new information once it becomes available.

Although not confirmed, it seems likely that Brand will be back, and during an interview with The Scotsman, the comedian expressed her love of hosting the Channel 4 spin-off. During the interview, the Extra Slice host said, "I love its happy audience, funny panel and — unintentionally terrifying sometimes — audience baking. And I liked the format. It’s a bit like Have I Got News For You, presenting, with a panel of funny people and an audience."

According to the official Great British Bake Off website, the popular Channel 4 spin-off serves up "an extra helping" of previously unseen moments, and delves into all the latest gossip from Britain's most famous tent. Each week, the host and accompanying panel will are joined by an eliminated baker, and members of the studio audience are given the chance to present their very own baking creations.

As reported by the Metro, the 10th series of The Great British Bake Off will arrive on Channel 4 on Tuesday, August 27, and the broadcaster confirmed the news in a Mad Hatter-inspired social media post. It read, "There ain’t no party like a Mad Hatter’s tea party. #GBBO returns Tuesday 27th of August at 8pm."

According to the Express, details surrounding the cast of Bake Off 2019 have so far been shrouded in secrecy. However, if previous years give us any indication, fans should expect the cast to be unveiled a week before the series kicks off — and unless the tenth series deviates from Channel 4 tradition, a total of 12 brand new contestants will be welcomed into the iconic tent later this month.

According to The Sun, the new season of the baking phenomenon is likely to run for ten consecutive weeks, and the grand final is expected to air sometime in November 2019. Although this might sound like a lengthy run, the series will surely fly-by due to the gripping nature of this very British television treat — and I can't wait.

The Great British Bake Off returns on Tuesday, August 27 at 8 p.m. on Channel 4.