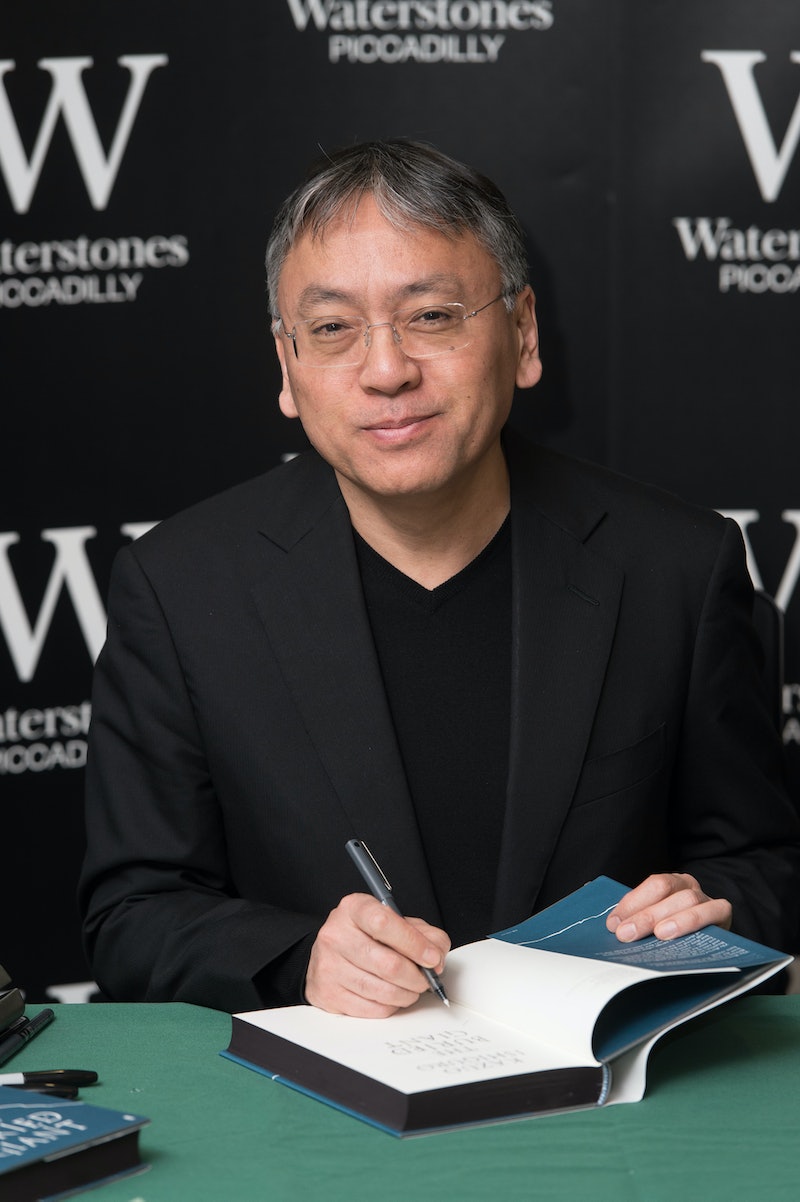 On Thursday morning, the winner of the 2017 Nobel Prize in Literature was announced, and Kazuo Ishiguro, the author of Never Let Me Go and The Buried Giant, among many other works, was awarded the coveted medal. So who is Kazuo Ishiguro, the 110th recipient of the Nobel Prize in Literature? The British novelist, screenwriter, and short story writer has been a full-time author for over three decades.

Born in Nagasaki, Japan, Ishiguro moved to the U.K. when he was just five years old. After graduating from the University of Kent with a degree in English and Philosophy, he went on to study Creative Writing at the University of East Anglia. Shortly after graduating, he published his first novel, A Pale View of the Hills, in 1982 which launched a long and illustrious international writing career that has spanned 35 years.

Unlike last year's surprise Nobel Prize recipient Bob Dylan, who is ironically one of the author's musical heroes, according to a 2015 interview with The Guardian, Kazuo Ishiguro has had a more traditional literary career. His work spans style and genre, but all of his writing, according to the prize selection committee, focuses on themes of "memory, time, and self-delusion." Whether he is writing about a haunting dystopian sci-fi or crafting a story about an English butler, Ishiguro creates rich worlds within his works that closely examine the breakdown between the memories of the past and the reality of the present, between the individual and society, between the truth and what we believe to be true.

In acknowledging his contributions to literature on Thursday during the Nobel Prize announcement, the Swedish Academy praised Ishiguro for being an author "who, in novels of great emotional force, has uncovered the abyss beneath our illusory sense of connection with the world."

In addition to his most recent novel, The Buried Giant, Ishiguro has published seven other full-length novels, several short stories and screenplays, and even some song lyrics. His best known works, The Remains of the Day and Never Let Me Go, were adapted into highly acclaimed films of which he wrote the scripts for himself.

A globally beloved author, Ishiguro's works have been published in over 40 languages, and have consistently found both critical acclaim and commercial success. Five of his seven novels — all except A Pale View of Hills and The Buried Giant — have garnered several major literary award nominations. While it was his novel-turned-Anthony Hopkins film Remains of the Day that eventually earned him the Man Booker Prize in 1989, three of Ishiguro's major works —An Artist of the Floating World, Never Let Me Go, and When We Were Orphans — were also short-listed for the award.

In 2005, his emotional dystopian sci-fi Never Let Me Go was awarded the National Book Critics Circle Award, and went on to become a film starring Keira Knightley, Carey Mulligan, and Andrew Garfield. In 2008, The Times even named him one of "The 50 Greatest British Writers since 1945." His many other accolades include the Winifred Holtby Memorial Prize in 1982 and the Whitbread Prize in 1986.

It seems like the real question we should be asking about Ishiguro is: where is he going to fit another medal? We can only imagine his mantle is looking pretty full already.

As if all of his literary awards and media attention isn't enough, Kazuo Ishiguro is also the recipient of an OBE, the Most Excellent Order of the British Empire, for service to literature and the Chevalier de l'Ordre des Arts et des Lettres. Currently, he resides in London with his wife and daughter.