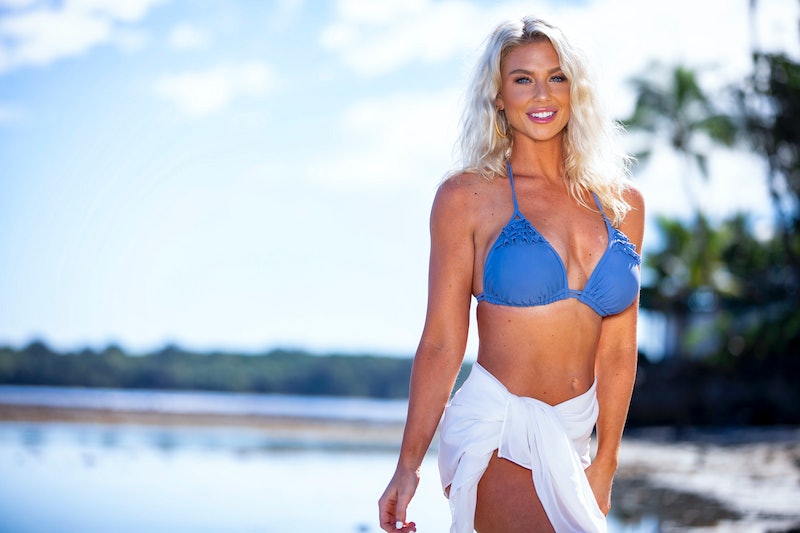 New faces are inevitable for fans of Love Island, the reality dating competition show that became a sensation in the U.K. and is now taking the U.S. by storm. One of those newcomers that fans will be taking note of is Love Island US' Kelsey, who showed up in Week 3 of the show's nonstop marathon of episodes. She said she's never been in love, but that could totally change during Kelsey's time on the show.

Kelsey is 25 and works as a mortgage marketing manager, according to the Daily Mail, and grew up in Newark, Delaware. She hasn't made too much of a splash just yet during her short time on the series, but she certainly seems to have caught the eye of another contestant, Weston. Other than that, fans will just have to wait and see what her future holds.

Kelsey's LinkedIn profile reveals that she has been "in the mortgage industry" since the age of 20, and that she received the Junior Loan Officer of the Year Award in 2015, 2016, and 2017. She definitely doesn't seem to be messing around there.

And that career path doesn't seem to be her only passion — her Instagram is full of beauty and modeling shots, and a platform like Love Island certainly can't hurt in that area.

Kelsey seems to be very into the beach, so she probably feels right at home on Love Island, and her Instagram beach shots are totally envy-inducing.

The series, which puts relationships to the test through challenges and dramatic situations, all with the promise of potentially winning a cash prize, is nothing if not dramatic. Couples switch up, new people are brought in, people go home, and people try to live in the same house while all this inter-mansion dating carries on. Their phones are taken away — no social media or contact with the outside world to speak of offers a reprieve from the onscreen drama.

But to some contestants, that's what's most appealing. "Modern-day dating is totally all the social media, texting, waiting days for a person to reply, or reading too much into the punctuation," another Love Island contestant this season, Mallory, told Refinery29. "On Love Island there is no phone, so that'll be super nice. I won't be freaking out if a guy like likes another girl's photos and stuff like that because that's what kills modern day dating, I think, the phones and the social media. It'll be really nice to be away from all that. It will be a lot more organic."

That definitely seems like a beneficial situation in which to get to know people, but it's hard to say how much of an advantage that really is when so many other stressors — like literally living with your new flames and their flirtatious friends — exist at the same time.

But hopefully Kelsey can keep up with the mayhem — if she's really never been in love before, this will certainly be an interesting way to dive in headfirst, all while the whole world watches.