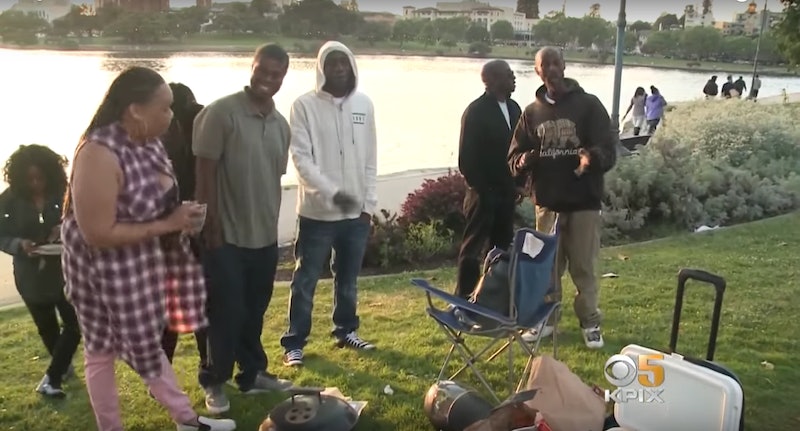 A California man is stepping up to make sure everyone has the right to enjoy public parks without fear of harassment and get young people more involved in politics. After "BBQ Becky" called the cops on Kenzie Smith, he's running for a seat on the Oakland City Council. "I’m not going to let someone else have a 'BBQ Becky,'" Smith told The East Bay Express.

If you missed the "BBQ Becky" debacle, here's the gist: A white woman called the cops on two black men who she said were barbecuing with a charcoal grill in an area designated for gas grilling back in April. No one was arrested once the police arrived, but Smith's wife posted a video of the encounter on YouTube, which led to the viral nickname "BBQ Becky."

Smith was then nominated for a position on the Oakland Park and Recreation Advisory Committee by Oakland Council member Rebecca Kaplan. She told the local news channel KRON4 that she wanted Smith to "help make the rules that govern how our parks are used and make sure that they are fair and clear." The commission makes recommendations to the City Council, but Smith went a step further and applied to run for City Council himself.

The 37-year-old is coincidentally the brother of the local rapper Mistah F.A.B. But despite his Bay Area network, he faces a tough political race after throwing his name in the ring months after his two opponents. Regardless, Smith hopes his campaign inspires more young people to hit the ballot box this year.

"Win, lose, or draw, it doesn’t really matter. That’s not what it’s about," he told Mother Jones. "What it’s about is trying to get these young voters to vote, to actually have their voice heard, and also to continue to inspire the younger generation to say, ‘If he can do it, then I can do it, too.'"

Along with encouraging young people to be civically engaged, Smith's platform centers around homelessness, renters’ rights, and education, he told Mother Jones. He also told The East Bay Express back in May that he wants to start a nonprofit to give teenagers summer jobs. So even if his City Council bid is unsuccessful, he plans to use his viral fame to improve his community.

In response to "BBQ Becky's" 911 call, Oakland residents started having "BBQing While Black" events to fight racism and promote black residents running for office. Smith kicked off his campaign at one such event on Sunday wearing a shirt that said "Kenzie Smith: City Council for District 2" on the front and "Together We Can Make A Difference" on the back, along with a yellow stick that read "I love being Black."

The "BBQing While Black" cookouts have drawn big crowds and given residents a way to collectively respond to "BBQ Becky." A May event boasted 30 street vendors, multiple dance contests, and six DJs playing hip-hop, R&B, and '80s soul music. It attracted both former and current Oakland residents, as well as people who came all the way from Los Angeles, Jhamel Robinson, one of the organizers, told CNN.

"It was disgusting and infuriating. Also, very offensive," Robinson said of "BBQ Becky's" behavior. "But the video also inspired us to take action to show the togetherness in our community."

Oakland voters will cast their ballots for City Council in November. If Smith's T-shirt over the weekend was any indication, his campaign slogan of "Together We Can Make A Difference" aims to make positive change from an upsetting situation. Even though he has some catching up to do in terms of fundraising, his campaign is already out in full force.

More like this
6 Organizations Fighting Police Brutality That You Can Support Right Now
By Syeda Khaula Saad and JR Thorpe
Kim Petras Just Made Grammy History
By Jake Viswanath
Jameela Jamil Defends Sam Smith After Trolls Body-Shamed Them
By Jake Viswanath
42 Black Owned Fashion & Beauty Brands To Support Today & Always
By Mekita Rivas, Shea Simmons, Kui Mwai and Dominique Norman
Get Even More From Bustle — Sign Up For The Newsletter
From hair trends to relationship advice, our daily newsletter has everything you need to sound like a person who’s on TikTok, even if you aren’t.