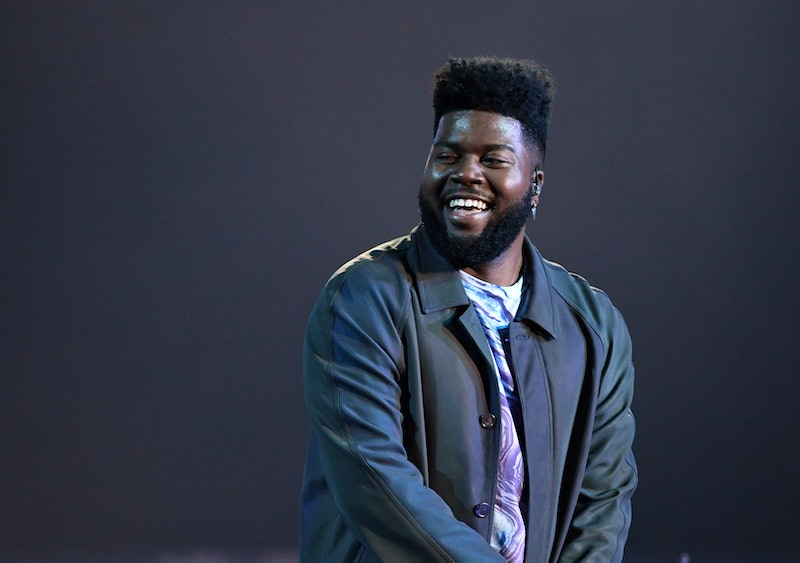 When the 2019 Teen Choice Awards kick off on Sunday, August 11, fans everywhere will be waiting to see their favorite stars hit the red carpet, and later, the stage, in the hopes that they'll take home a coveted surfboard. With four big nominations, plenty of eyes will be on rising R&B star, Khalid, and with added attention comes one very important question: Who is Khalid dating in 2019?

At just 21 years-old, Khalid has already made his mark on the music industry, thanks to smash hits like "Location," "Talk" and "Young, Dumb & Broke" and a collaboration with former Fifth Harmony member, Normani Kordei. Though his music, which chronicles the highs and lows of teenage life and the issues that affect young people, connects to fans on a deeply personal level, the singer has managed to keep much of his personal life out of the spotlight. In other words: Khalid appears to be single, but if he is dating someone, there aren't any clues for fans to discover on his social media accounts.

Growing up, Khalid's mother was in the military, which meant that the family moved around quite a bit. In a 2017 interview with Teen Vogue, he revealed that one move in particular — from Carthage, New York to El Paso, Texas — inspired him to focus on his songwriting, as music was such an important part of his life.

Reflecting on the move, and having to leave behind all of his friends to start over in a totally different state, Khalid explained, "That sense of devastation knocked me into writing songs to get out all of my feelings." He continued, "I had to break-up with my girlfriend of four years when I moved and suddenly all of the friends I had made in New York weren’t there anymore. As a response I wrote 'Saved,' which is a story of resentment and loneliness."

While that move and the breakup that it caused may have pushed him to take his music career more seriously, it wasn't until after Khalid had emerged as a rising star that he was linked to another romance. In February 2018, Khalid and Kordei released "Love Lies," and fans soon began speculating about their relationship and hoping that they would become a couple.

Still, both Khalid and Kordei maintain that they are just close friends; Kordei even had a cameo in the music video for "Young, Dumb & Broke," where the pair played the "Prom King and Queen." In an August 2017 interview with MTV, Khalid explained that the cameo was a last-minute decision, made while the pair were casually texting. "Me and Normani are like this [crosses fingers]," he told the outlet. "So I was just texting her, out of nowhere, super last minute. I’m like, 'Do you wanna come to the video shoot?' and she’s like, 'Yeah, on my way.'

He continued, "Every time we’re around each other we always have so much fun. She’s such a cool girl, she’s so nice, and she’s such a sweetheart. I’m just thankful that she’s in the video because I’m pretty sure it’s not the first thing that we’re going to be in together."

His intuition was correct, and in March 2018, a month after their collaboration, "Love Lies" was released, the former Fifth Harmony member told Billboard, "Khalid and I have been friends for a minute now." Speaking about the song, she continued, "It kind of happened really organically and it’s just two genuine friends making music for the sake of the art. I remember him telling me, he was like, ‘Yo, I want this to be my favorite song. Let’s not even go into it trying to create a hit.'"

Khalid may appear to be single at the moment, but considering he is in the middle of a successful North American tour and is nominated for Choice Male Artist and Summer Music Star: Male (among others) at the Teen Choice Awards, it seems as if he's a little too busy to focus on his love life right now.