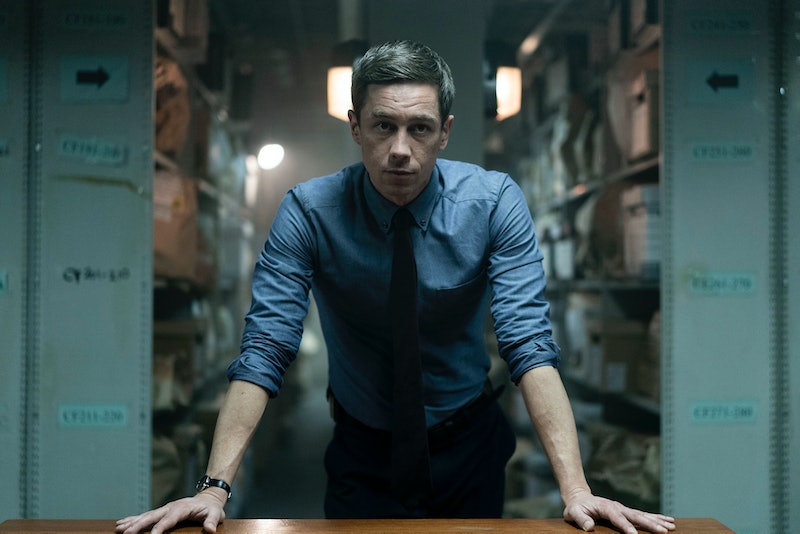 Your Monday evenings are sorted for the next few weeks thanks to Dublin Murders — especially if you've been after a show to satisfy your inner crime solver. The series follows two detectives, played by Killian Scott and Sarah Greene, as they investigate the murder of a 12-year-old girl. But who is Killian Scott, and what have you seen him in before?

Raised in Sandymount, Dublin, the actor "studied English and philosophy" at the Univesity College Dublin before he began his acting career according to The Herald. Scott then went on to train at the Drama Centre in London, eventually landing his first major role on the Irish drama Love/Hate in 2010. "I was 24 when it started and it was my first professional job," he told The Irish Post in 2013.

"How I got there is a long story but basically, I was just about to start my third and final year of training at Drama Centre when I sent out a bunch of letters and headshots, for the hundredth time, and luckily, the timing of it, one landed in front of [casting director] Maureen Hughes," Scott explained.

After a week or so, Higgins informed Scott that he'd got the part. "The next day I left drama school, the day after that I signed with my agent and a week later I met Rob [Sheehan], Tom [Vaughan-Lawlor], Aiden [Gillen] and the gang and I guess we got to work. It was easily the most exciting few weeks of my life."

Love/Hate ran for five seasons, eventually coming to an end in 2014. From there, Scott went on to star in an episode of Call the Midwife and played significant roles in Ripper Street, Strike, and Damnation before his role on Dublin Murders.

Described as a "psychological crime thriller" by BBC, the series isn't your usual cut and dry detective drama. "I found that complexity interesting," Scott told the BBC in a press statement. "There's also a quality of the supernatural that runs through the show — it doesn't shy away from the darker recesses of the human mind and the scripts are very authentically convincing."

"There are elements of the storyline that are inevitably slightly heightened, but the scripts were still rooted in believable individuals and believable circumstances."

This is also the case for the setting, especially how Irish humour is presented in the series. "It's extremely dark, and it is something I miss when I'm away from Ireland," he said. "There's a certain type of gallows humour that the cops in the show have with each other, and it's a little bit cynical but very Irish."

Scott's work on Dublin Murders almost circles back to Love/Hate, which focused on "gangland stuff" and was also set in the capital. "It's a topic that has been explored before when using Dublin as a setting," the actor explained. "What Dublin Murders does is that it goes further in depth, giving greater insight into other elements, such as the police department and property development."