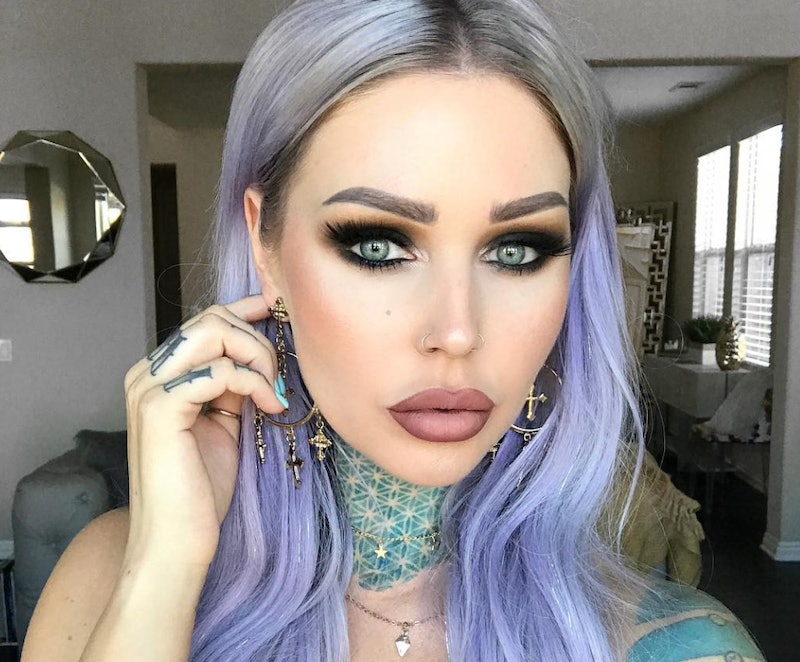 Looks like brand x vlogger collaborations will still be going strong in 2018. Urban Decay has teamed up with vlogger Kristen Leanne for a collection, boasting palettes and lipsticks, that drops in January. While UD doesn't do a ton of collabs with influencers, this partnership makes total sense, since Kristen Leanne is incredibly on brand. Say hello to your newest online beauty icon.

With her mermaid hair and copious tattoos, she falls in line with UD's edgy, unique, and irreverent ethos and aesthetic. Urban Decay totally disrupted the beauty industry with its unusual color offerings, which always had cheeky and badass names, and its desire to allow users and customers to fully express themselves as they saw fit. That's why Leanne is the right choice for a UD collab. She embodies that spirit and reminds us of actor Ruby Rose, who has been serving as the face of Urban Decay, thanks to the inkings that decorate her arms and her throat.

The influencer revealed her upcoming products. Of course there is an eyeshadow palette packed with adventurous colors, since those are UD signatures. Urban Decay x Kristen Leanne also features a face palette and lipsticks.

The above post from Kristen's IG is the first look at the products. There's a face palette, lippies in bullet form, and another slim palette, which also appears to contain shadows.

Have a closer look at the eyeshadow palette. Those hues absolutely pop.

The mirror boasts the phrase "Stay Gold," which is a popular and oft-quoted line from The Outsiders.

The palette is viewable on the UD site, but it is not yet available for purchase.

So, who is Kristen Leanne, if you are not super familiar with her? Well, in addition to looking like a real-life mermaid, here is some key intel.

1. She Has A Massive & Loyal Social Media Following

She's stunning, with a totally original look. No wonder she has amassed 789,000 Instagram followers, whom she refers to as "foxes." She posts tons of makeup tutorials on her Insta feed, is honest, and is a consummate over-sharer, which UD proclaimed is to her credit! That's what makes her so relatable.

She doesn't just tell you what products she used to create her look in her captions, either. She always includes a little detail about her life, like how she just got done wrapping tons of holiday gifts.

Tons of vloggerrs and Internet MUAs post videos of themselves applying makeup. Zzzz. Been there, seen that. KL's YouTube clips are super serviceable. She has nearly 490,000 subscribers, thanks to her bouncy but badass energy and her believable tips and tricks.

3. She Has A Twice-Pierced Nose

Her easy, conversational vibe and those cute and quirky faces she makes will leave you feeling like you've been besties for ages. Oh, and don't you just love her double-pierced nose, which is another element of her incredibly unique style?

According to Famous Birthdays, her bday is Dec. 12, which makes her a Sagittarius. She just turned 29.

KL is the founder of Arctic Fox Hair Color, a vegan and cruelty-free hair color brand, since she is super passionate about her animal sympathies. Arctic Fox also donates 15 percent of its profits to organizations that work to end animal abuse and suffering.

The influencer is married to Ryan Morgan, who is also heavily tattooed and who isn't afraid to rock merman hair and/or beards. Check out his foray into navy face pubes. Seriously, though! Kristen and Ryan are the cutest and most colorful duo on the web and we are totally waiting for her to rock a full tutorial of her Urban Decay products on his face!

Have you started to following Kristen Leanne on Insta yet? If not, what are you waiting for? Don't miss out any longer.