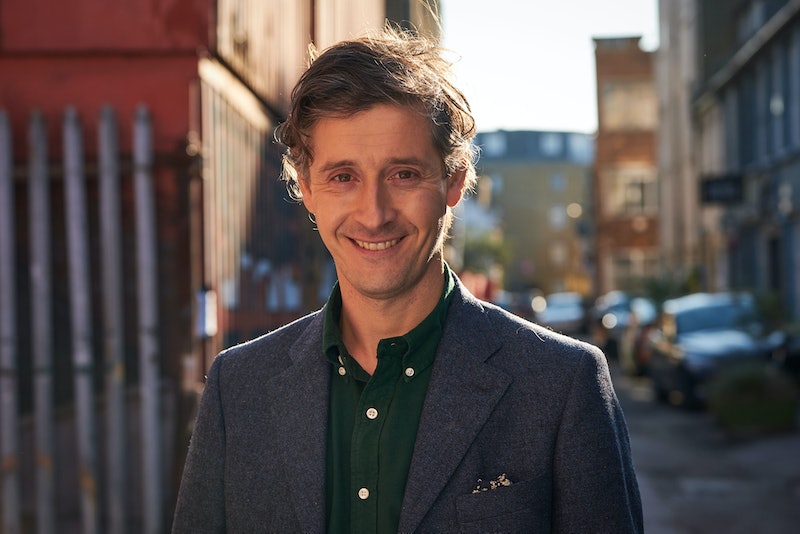 Oh, how I love a celebrity version of a British challenge show. First it was Channel 4's Bake Off, now it's BBC's The Big Painting Challenge — I just can't get enough of uncovering the talents that celebs have hiding up their sleeves. But what I love more than anything is seeing the professional judges of these shows being just as surprised — and a sometimes delighted — by what these celebs have to offer. So who is Lachlan Goudie, and how did he end up on Celebrity Painting Challenge?

If you're not familiar with Goudie's work, creativity certainly runs in family as his father Alexander Goudie is described as "one of Scotland's finest figurative painters" on the website The Alexander Goudie Trust.

It was Lachlan's father that first inspired him to become an artist. "I've always been engaged with the tradition and history of painting," he told art supplier Cass Art, before continuing:

"[W]e had a library full of art books, and he would put them out and challenge me to make copies of Rembrandt and other great painters. I was about 8-years-old, and I'd produce these crazy Piccaso-esque pieces, but it meant I really absorbed the influences of the Old Masters."

But, as he later explained to Cass Art, his father made sure that his son wanted to pursue art. "I was always drawing and painting, but my dad was very careful about making sure I wasn't following in his footsteps for the sake of it," he explained.

"I became an artist because I wanted to do it. At first I wanted to be an architect, and then a film maker... I went to university before art school because you needed a degree to go to film school. But I continued to paint whilst at uni and I got a scholarship to paint, and that's when it felt right, that I had a commitment to it. It's a vocation in some ways. I feel compelled to do it."

Lachlan won his first award in 1999 at the Royal Glasgow Institute of Fine Arts, which was the R.S.P prize for painting at the annual exhibition, and has gone on to receive multiple accolades and selected exhibitions throughout his career, as his official site charts. He graduated from the Camberwell College of Arts at the London Institute with a BA in Fine Art in 2004. He was also elected to become a full member of the Royal Institute of Oil Painters in 2013, where his work has been described as exploring "our nostalgia for a lost world of travel, adventure and romance" by the Federation of British Artists. To be a member of the ROI is a pretty considerable honour, as Lachlan is among "many of the leading oil painters in the UK, amongst them several Royal Academicians."

Lachlan is also a regular presenter for the BBC, where his work includes the radio programme From Our Own Correspondent and the BBC Four documentary Secret Knowledge: The Art of Witchcraft, which came out in 2013. But you're probably most familiar with Lachlan on The Big Painting Challenge, and most recently on the celebrity version of the show, where he is a judge alongside Daphne Todd OBE.

Airing weekly on BBC One, Lachlan and Daphne will be judging the likes of Laurence Llewelyn-Bowen, Jane Seymour, and Phil Tufnell as they compete to auction of their paintings for charity during the final on Thursday 25 April.

Celebrity Painting Challenge airs Thursdays at 8 p.m. on BBC One.

More like this
Michael Owen Has Shared His Thoughts On Luca & Gemma
By Bustle UK
12 Crucial Casa Amor Predictions About Who Will – & Won’t – Stay Loyal, Babe
By Victoria Sanusi
Joey Essex's Net Worth Is Not What You Expect
By Sam Ramsden
'Love Island' 2022 Is Officially The Most Watched Ever
By Sam Ramsden and Frances Stewart
Get The Very Best Of Bustle/UK