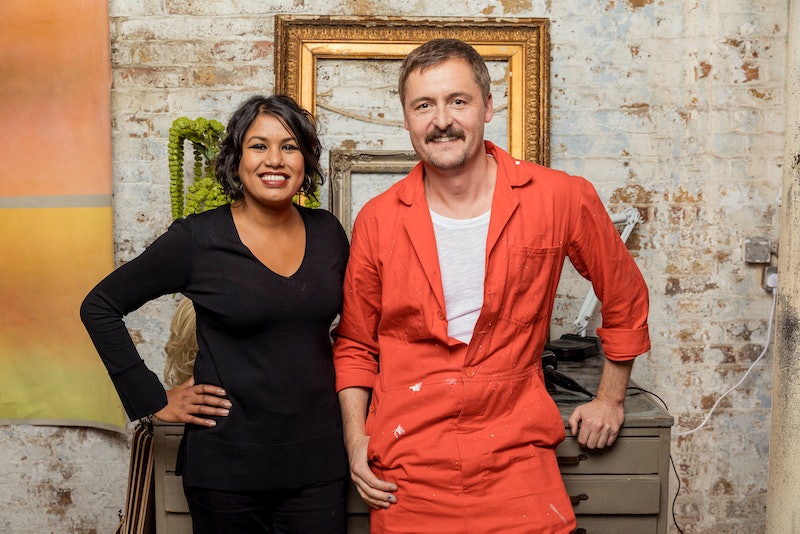 BBC's Celebrity Painting Challenge has been showing what celebrities can do with their paintbrushes — with a lot of surprising results. Shows like this serve to give people a glimpse into the secret talents of the rich and famous. So could the UK's finest red carpet walkers be hiding amongst them a budding Bacon? Or a hidden Hopper? Or even a private Picasso? Let's be honest, probably not: but if there is a potential genius, they may need a little guidance. Guidance in the shape of mentors. So who is Pascal Anson, the Celebrity Painting Challenge mentor? Well, he is qualified AF for the role and let me tell you why.

Pascal Anson is an artist, author, and designer who bills himself as "making the ordinary extraordinary," and y'all he is not lying. Anson studied Design Products at the Royal College of Art as well as at Kingston University. He has since gone on to lecture at both institutions as well as lots of others in the UK and around the world. His love of teaching knows no bounds and he teaches not only art students but all sorts of people. He spoke to the Telegraph about his pupils.

"I don't mind who I'm teaching as long as they are up for it and have a certain energy. Some of them haven't drawn in a long time and they feel nervous. I have to find a way to design things so that everyone gets to produce something amazing".

Pascal became a household name however, back in 2012 when he got his very own piece of the 2012 London Olympics pie. After entering and winning a competition with British Airways, he painted planes to look like doves ahead of the games. As the Mirror reports, he said he was inspired by the most unlikely of things — his commute.

"On my journeys from Brighton to London, I've often looked up at aircraft landing at Gatwick and wondered if it's a 'bird or a plane', and the idea developed from there. When I started researching birds further I realised it had to be a dove. Not only are they a symbol of peace and social unity, but they were also used in previous Olympic Games ceremonies, including the last London Games in 1948".

Wow that really shows what you can do if you look around you instead of scrolling, am I right? As the Guardian reports, he went on to get a book deal after this, too. So not only is he well versed in making art, studying art, and teaching art but he is also super familiar with art competitions. Yikes, could he be any more qualified?!

Fans of the format might be excited to know that apart from the celebrity version of the TV show, there is also a regular version called The Big Painting Challenge which sees artistic members of the general public competing to win, and guys Anson is on that show too.

The celebrity version of the show will air weekly on BBC One and be in four parts. The grand finale on Thursday 25 April will see the winner crowned and their art piece auctioned off in aid of charity.