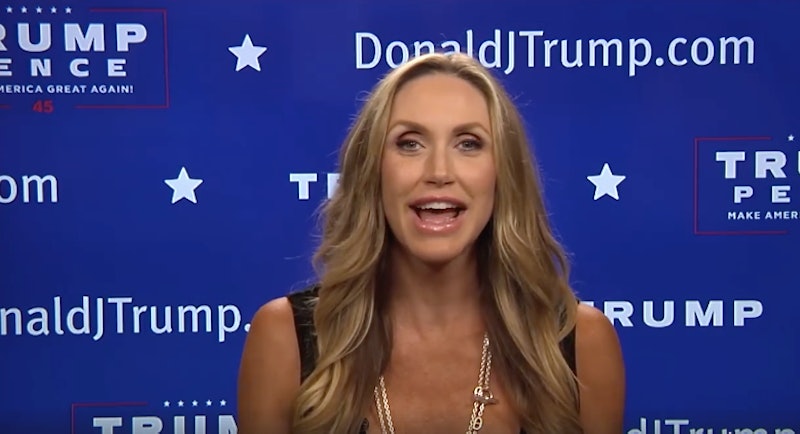 Not to sound alarmist, but in lots of countries the state news is the only news. Forget anything that's critical of the leaders or controversial. Only state-sanctioned stories air on the broadcasts. Well, the U.S. is one step closer to that — if only on a web video with two million views. President Trump's Facebook page is now hosting a "real news" segment as a way to bypass the mainstream media; critics, however, are already likening it to "propaganda."

Trump's daughter-in-law, Lara, who is married to Eric Trump and used to be a producer for Inside Edition, hosted the short video in front of a wall of his logos, speaking much like an anchor would. There was no B-roll, on-screen graphics, or true news coverage. She made a list of his accomplishments and then left out everything else that had been covered the previous week.

"I bet you haven't heard about the accomplishments the president had this week because there's so much fake news out there," Lara says to introduce the short web video. Then she goes on to tout how he donated his salary.

Trump reportedly donated a portion of his pay to the Department of Education to pay for a camp for science, technology, engineering, and math; the first portion reportedly went to the National Park Service. "This is a president putting America before himself," Lara says.

Trump's "real news" program are essentially a running list of the things that have happened since he took office in January, like new jobs creation, and things that Trump's done, like meeting veterans in Ohio.

Sure, what Lara lists in her video aren't untrue. But the "real news" program ignores the biggest headlines about the tumultuous White House, including the Russia investigation, his tweets banning transgender people in the military, his attacks on his own attorney general, and more. Of course if Trump supporters watch this — and only this — there's the chance they'll continue to support the least popular president of all time. Some polls put his approval rating at a mere 33 percent.

There was a teaser almost two weeks ago too featuring a video from Lara. "Tired of all the fake news?" She went on to say, "We're going to bring you nothing but the facts."

Plus, just to hammer home the problems with Lara serving the role as news host for Trump, she stars in a video asking for campaign donations for 2020 — already! She tells his supporters that they appreciate the support, and that they can donate to show it. "Any amount that you could donate would be greatly appreciated," Lara says into the camera, So she's providing the "news" and asking for donations. I can see just a few conflicts of interest.

To be fair, nothing Lara has said so far is not true — it's just not presenting a glowing list of things the White House and Trump has done. "I'm Lara Trump," she says as she signs off, "and this is the real news."