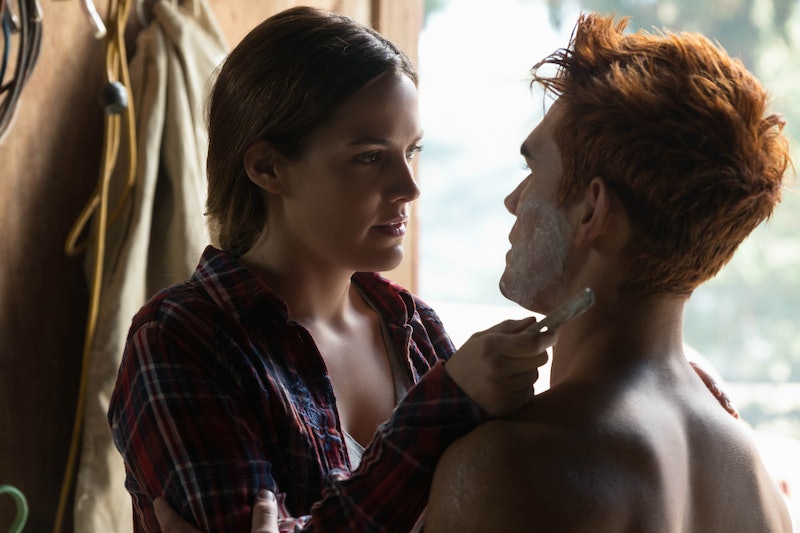 Archie Andrews and Jughead Jones may think their problems are (mostly) behind them now that they've embarked on their little road trip together, but Riverdale will be the least of their worries during Wednesday night's episode, "The Man in Black." This will mostly be thanks to Laurie Lake on Riverdale, a new character played by Riley Keough. As of now, it's unclear exactly what trouble she'll bring, but let's just say that she'll be leaving a lasting impression on both Archie and Jughead by the time the hour is over.

When it was first announced back in September that Keough would be appearing in the series, her character was described as being an "all-American farm girl" who provides Archie and Jughead with a place to stay after they wander onto her property. However, appearances can be deceiving, and on a show like Riverdale, an act of kindness should never be taken at face value. Laurie may seem nice at first — and possibly even romantically interested in one or both of them (sorry, Veronica and Betty fans!) — but the situation ends up taking a rather unexpected turn, putting Archie and Jughead into "more danger than they could have imagined.” Maybe they should've just stayed in Riverdale after all.

While it's not immediately apparent what her intentions are and how she'll fit into the Season 3 story arc, fans can always look to the Archie Comics for clues. The character first appeared in a contemporary series to the Archie stories, known as the Wilbur Comics. Many found Archie and Wilbur to be almost parallel versions of each other: Wilbur was basically Archie 2.0, and his girlfriend, Laurie Lake, seemed to represent a parallel version of Betty.

Right now, it's hard to say if Laurie will share any personality traits with Betty on the show, but perhaps this will be a way of bringing back Dark Betty without actually bringing back Dark Betty. Laurie could end up representing all that Betty could become if she gave into her darker nature. Then again, maybe Keough's Laurie will be entirely different from her comic book counterpart aside from the name. Either way, it could mean bad news for Archie and Jughead moving forward.

The fact that Keough was cast in the role is particularly exciting, given that the actor herself lobbied to make an appearance on the show earlier this year via Twitter. "I just want to be cast in Riverdale," she tweeted back in March. Now, that dream is about to become a reality — but what may serve as one person's dream could prove to be another's nightmare. Such is the case for both Archie and Jughead. Will they be able to make it off of Laurie's farm unharmed? Viewers will just have to tune in this week to see how it all ends up playing out. At least she can't be more dangerous than the Gargoyle King... right?!

Riverdale airs on Wednesdays at 8 p.m. ET on The CW.