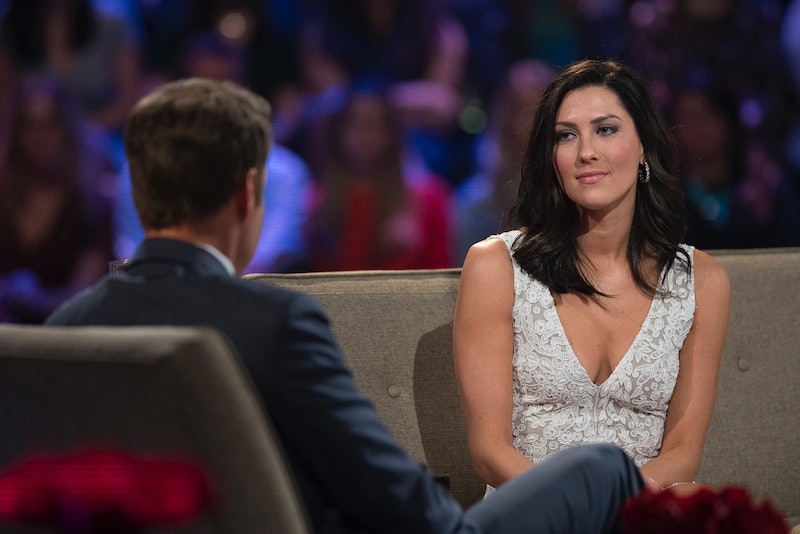 On Tuesday night's After The Final Rose, Becca was announced as the new Bachelorette, and she even got a jumpstart on her season as she met some of the men vying for her love on live national television, before official filming even started. One of the Bachelorette contestants, Lincoln, made an impression on fans. With his adorable bow tie and dreamy accent, he was already likely well on his way to becoming a fan favorite. One line, though, locked in that status for good. “I cannot speak for everybody but I can speak for myself and a few people here," he told Becca. "Arie is a wanker."

Yeah, the man knows his audience. He seemed to already sweep Becca off her feet with his first appearance, and lord knows she deserves some bona fide romance in her life after the fiasco with Arie unfolded. Lincoln brought up the finale and the situation with Arie right off the bat, but besides his initial dig at Arie, he made it all about Becca and her strength. "I watched what you went through last night but I applaud you ... for being able to put yourself back out there," he said. "At the end of tonight is also my birthday, so I can't ask for a better birthday present than having you here as the Bachelorette, and I really mean it."

Lincoln was just the first among several men who stepped up to introduce themselves to Becca on After The Final Rose. Given the fact that she had just she had just watched her ex-fiance get engaged to someone else just moments before — Arie's tact knows no bounds — the girl deserved a pick-me-up after a night of emotions. She was surprised by several other men, some wielding banjos, horses, or just a great smile. The season of The Bachelorette is looking promising even before official filming begins.

This early introduction to the contestants of The Bachelorette isn't exactly unprecedented, either. The same thing happened prior to Rachel Lindsay's season of The Bachelorette — on Nick Viall's After The Final Rose special, her future suitors were marched out to hopefully make a lasting first impression. According to The Hollywood Reporter, it was a Bachelor franchise first when they allowed Rachel a sneak peak of the season to come. "I'm normally not at a loss of words — I don't even know what to say right now," Rachel said as she awaited their arrivals. "I wasn't ready!"

It seems now that this might be something the franchise continues to do for the foreseeable future — though this particular year's After The Final Rose was particularly dramatic and action-packed, the live special doesn't always offer that same level of excitement, and an early glimpse at The Bachelorette serves to spice things up and drum up interest for the season to come. While Becca certainly didn't have any need for additional anxiety as this season came to a close — the horrifying, nationally televised breakup probably met that quota for her — this was the good kind of anticipation.

After all Becca's been through, she definitely deserves for some stand-up guys to show up for her in a big way when she takes up post as the new Bachelorette. She's always proven to be a cool, calm and collected woman with a strong head on her shoulders, and the ordeal with Arie doesn't change that. If anything, this experience on The Bachelor has probably given her an even firmer grasp on what she does and doesn't want in a relationship, and now that she's in the driver's seat, hopefully she finds her fairy tale ending in this new batch of guys.

More like this
All The Clues About Aly & Zach’s Relationship Status After 'The Bachelor'
By Brad Witter
Zach Explained Why He Had To Send Bailey Home Early On 'The Bachelor'
By Brad Witter
Everything To Know About A Potential 'RHODubai' Season 2
By Kadin Burnett and Brad Witter
Airris From 'MAFS' Says He Doesn’t Regret Going To Decision Day With Jasmine
By Brad Witter
Get Even More From Bustle — Sign Up For The Newsletter
From hair trends to relationship advice, our daily newsletter has everything you need to sound like a person who’s on TikTok, even if you aren’t.