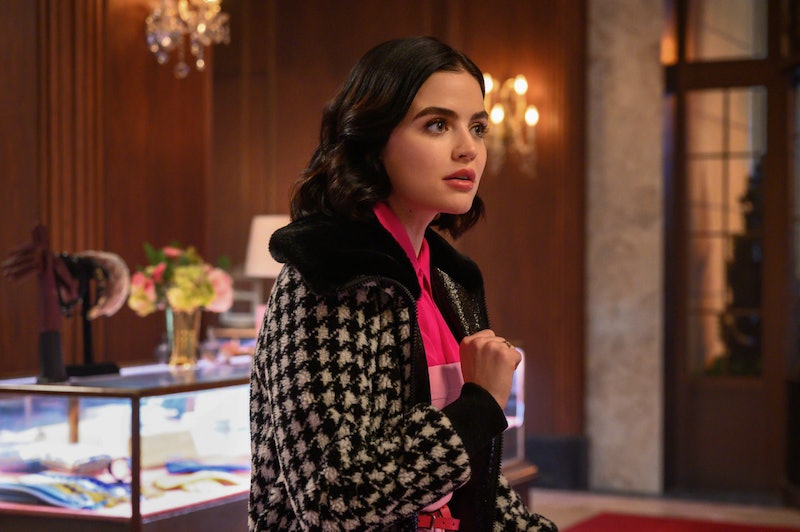 Katy Keene may not have as many mysteries to solve as its sister show Riverdale, but it does have a big question that needs answering: who is L.L.? At the end of the March 5 episode, Katy noticed an engraving on the bottom of her mother's sewing machine that read, "For Katherine. Love, L.L." She also discovered that the machine was a Lacy's machine used only by staff...except Katy doesn't think her mom was a seamstress for the store. Now, she wants to know who in the Lacy's world would have given the gift to her mom — and why her mom didn't tell her about it. "Why would she keep that from me? What else wasn't she telling me?" Katy wondered. "I realized for the first time in my life that the one person I trusted most, my mother, may have been keeping secrets from me."

Luckily, there are already several theories about who L.L. could be (and, no, it's probably not the fashion company L. L. Bean). Here are the strongest so far.

If it's a Lacy's sewing machine, it stands to reason that the second "L" could stand for Lacy. We've met Mrs. Lacy, the very traditional owner of the store. Perhaps she knew Katy's mom Katherine somehow? Another possibility is that the sewing machine was a gift from a male Lacy family member who Katherine had a relationship with. We don't know much about Katy's dad, but he could have been a Lacy. That would make Katy the heir to the Lacy's store and fortune, which her boss Gloria would just love.

In the CW's version of Katy Keene, it seems more like Katy is the daughter of the original Katy, rather than an adapted version of her. The character in the comics was friends with Gloria Grandbilt, which is the name of Katy's boss, as well as a woman named Lucki Lorelei, who could very well be the person who gave Katy's mom the sewing machine. That would mean that Gloria potentially knew Katy's mom as well, and has hidden that information from her for some reason.

Katy has been friends with Veronica Lodge ever since her mother designed Veronica's Quinceañera dress. Is the sewing machine somehow a gift from an L-named Lodge family member we haven't yet met? It's far-fetched, but Riverdale and Katy Keene are connected, so it's not implausible.

In any event, Katy is on the case, so we'll probably find out the truth soon enough.