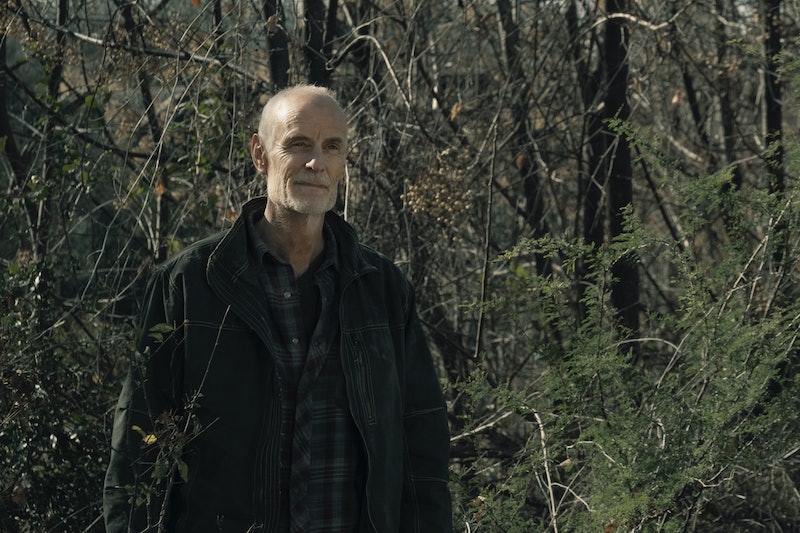 Fear The Walking Dead took us right to the center of the action in the Season 5 premiere. However, while the group is united and invigorated in their new philanthropic mission, they're majorly out of luck. Logan on Fear The Walking Dead, played by Matt Frewer, is a surprisingly calm and threatening new villain.

In the Season 5 premiere, a team is looking for Logan — seemingly, they're answering a distress call. A lot has happened since Morgan, Alicia, and Strand's group of survivors decided to start helping people and build a forward-thinking community. They're based at a mill, and still trying to brew beer. They've also acquired a couple of planes, which is pretty cool.

According to the radio conversations that Morgan had with Logan, his people were well supplied but surrounded by the dead (or growlers, as their young companions called them) and needed help getting out. As they approached, they found evidence of humans using zombie parts as some kind of threatening art installation. It may be the more pressing threat in the long run, but first they have to deal with Logan.

As is so often the case in the post-apocalypticWalking Dead universe, Logan was leading them into a trap. While half of Morgan's group followed Logan's instructions, the other half were ambushed as Logan's people took the mill.

It's hard to get a read on Logan. He calls Morgan "kemo sabe," which is patronizing at best, cultural appropriation at worst, and is just not a good sign. He also calls Alicia "sweetheart" — so he's the worst, basically. He was a part of the original box supply group that Morgan and the others discovered in Season 4. Remember Clayton, also known as Polar Bear? Logan was his partner. He's the "L" in "C&L" but doesn't share Clayton's charitable nature, according to him.

Apparently the mill originally belonged to Logan sometime before the outbreak? Why, then, didn't he take better care of it? Why did he lose it in the first place? Who cares about deeds in a time like this? Logan needs a dose of reality.

That said, he successfully did a little divide in order to conquer the mill without a big battle. Morgan, Alicia, John, Al, Luciana, and June are now at an abandoned truck stop in Texas with three kids they picked up along the way. Since they crash landed a plane, it's going to take a long time for them to find their way home... if they even have a home. There's a creepy group of armored survivors (who probably had something to do with that art installation) attacking Team Texas, too.

Meanwhile Strand, Charlie, Wendell, and Sarah made it back to the mill only to find Logan's crew at the gate, heavily armed. Plans to retake the mill are already in motion. Charlie volunteered to sneak in. Strand volunteered to fly another plane and find the others — and then discovered that Al met the group's old antihero pal Daniel Salazar on her journalism journey.