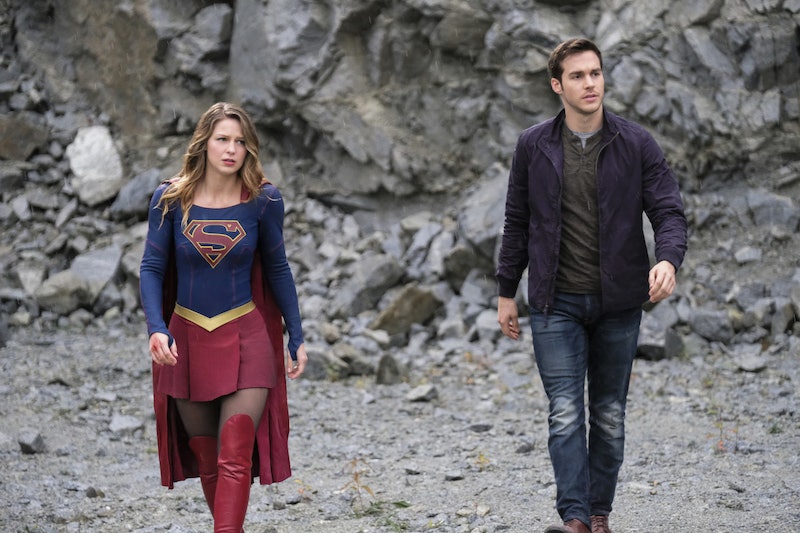 Kara and Mon-El ran the gamut of "will they or won't they" tropes on Monday's new episode of Supergirl. They pretended to be a couple while on an undercover assignment together, bought each other gifts that reflected inside jokes, and got sold into intergalactic slavery together! While their relationship is still platonic, he does want to be a superhero now, and things are about to get complicated in a different way. Who is looking for Mon-El on Supergirl? Hooded aliens are headed for the team's newest member.

While the two aliens were stuck on a red sun planet with no powers and a bunch of kidnapped humans depending on them, some of the kidnappers/human traffickers recognized Mon-El and said something to him that had him spooked. Later, James Urbaniak's character was questioned (and then killed) by two creatures with a hologram of Mon-El. Looks like they're headed to Earth next.

So, like, he's totally the Prince of Daxam, right? We can all agree on that? Just like Maggie Sawyer isn't fooled by Kara's glasses disguise, I'm not fooled by his story that the Prince sent him to Earth as an act of sacrifice. He didn't work as a guard for the Prince, he is the Prince. Maybe it was a decoy situation, but I have a feeling that "the last Daxamite" doesn't carry the same weight (and probably isn't accurate) as a member of the former planet's royal family. That would help to explain his over-privileged behavior and aversion to having a job. On Earth, he can reinvent himself — but he probably also carries some guilt for having left his planet behind.

Royalty or not, his past is coming back to haunt him and fast. Hopefully Kara won't kind that he kept this tiny detail hidden. With all the secrets that various characters on Supergirl have kept from one another, this one doesn't seem to be that damning, even if it has the biggest consequences.