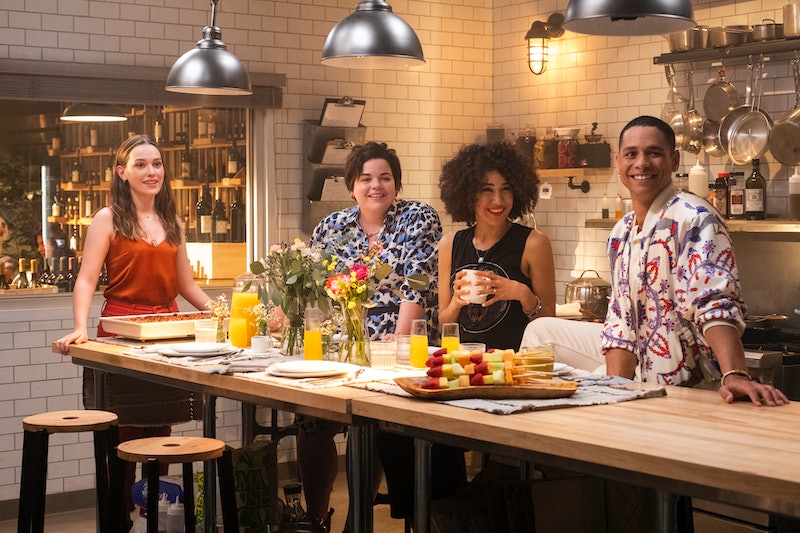 With Beck dead and out of mind for Joe now, he's moved on to a new love interest. Literally named Love, the YOU character is played by Victoria Pedretti. Netflix fans will recognize her from The Haunting of Hill House where she played Nell Crain, and she also recently played a Manson follower in Quentin Tarantino's Once Upon a Time in Hollywood.

According to W magazine, Hill House is the first role Pedretti landed after graduating from drama school. But one of her first auditions was actually for the first season of YOU. "It was the first callback I ever had for a show," Pedretti said, although she didn't elaborate on which role she was trying out for. "[When it eventually came out], I couldn't stop watching it. It's really captivating," she added.

Now Pedretti will be part of the reason it remains as captivating in Season 2 through her commanding performance as Love, Joe's new love interest. Love comes from money but has a down-to-earth sense of self, which is helped by the fact that she does actually work — albeit as a chef at her parents bougie grocery store/café Anavrin. She's also suffered real loss, which is what initially connects her to Joe — although she doesn't know that Joe's loss is one of his own doing, because he killed his former girlfriend. Showrunner Sera Gamble explained that Love sees Joe as a "kindred spirit," because of their shared relationship struggles.

One thing Love doesn't share are personality traits with Joe's former love Beck. "She's way less of a follower than Beck was," Pedretti told W magazine. "I think [Joe] didn’t like the fact that she— I mean, f*ck what he thinks, but he thought [Beck] was being bulldozed by these people who didn't really understand her." Love doesn't share that same issue, perhaps because she was raised in a life with a lot more privilege.

Pedretti told Cosmopolitan magazine that she got into Love's character by spending time in Los Angeles' trendy Silver Lake neighborhood. She read up on famous socialites and spent time in the world of astrology while also adding words like "yacht" into her vocabulary. "I tried to think about what it would be like to grow up with a lot of money, with all the resources that a lot of these people have," Pedretti said.

Those resources help Love be less of a damsel in distress than Beck was in Joe's eyes. She's less of Joe's target and more of his equal — at least, Love thinks she is. There's a lot she doesn't know about Joe, and he makes frequent assumptions about other people as well that misinform him throughout the series. As much as Love may view Joe as a "kindred spirit," there's a whole side of him hiding beneath his "nice guy" exterior. Viewers can only hope Love doesn't have to meet that side and share the same ending as Beck.