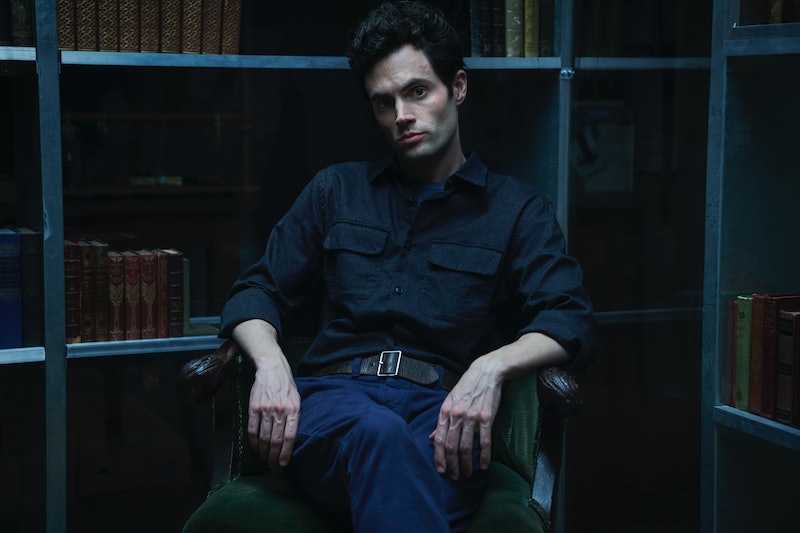 Penn Badgley's Joe Goldberg may have been a serial killer and stalker, but on the first season of Netflix's surprise hit show You, he charmed fans almost as much as he charmed poor Beck (RIP). And he's about to do it all over again. The You Season 2 release date was just announced by Badgley himself with a very enticing yet creepy teaser. Fans of the show can see Joe on their screens once again on December 26, meaning that Netflix just gave fans the best Christmas present they could ask for.

Badgley announced the exciting news in a tweet on Monday, Nov. 11, posting the new teaser and declaring that he was "ready for a fresh start." The teaser shows absolutely nothing but Joe menacingly staring into the camera. It's not much, but it's absolutely enough for fans to start going crazy.

While the teaser doesn’t give much away about the upcoming season, fans already know at least some of what the world’s most eligible serial killer will be up to this time around. Having burned his New York bridges in Season 1, Joe moves to Los Angeles, and he just might have a new obsession. The Haunting of Hill House star Victoria Pedretti was cast as Love Quinn, an aspiring chef who also works in the retail world, like Joe.

Joe becomes intrigued by Love because she's the opposite of Beck — uninterested in the world of social media and taking care of herself internally rather than promoting herself to the world. "I'm really excited for people to get to know Love," Badgley said in a June interview with Entertainment Tonight. "She adds a dimension that hasn't existed yet. There's a side to Joe that we haven't seen yet because her character, in some ways, is the polar opposite of Beck."

But unlike Beck, Love doesn’t come into Joe’s life as a literal love interest. At least not at first. “Joe is not out there looking for love,” You showrunner Sera Gamble told Entertainment Weekly in January of 2019, when Pedretti’s casting was announced. “He’s truly heartbroken by what has happened, and so what Love offers is a different kind of friendship and a different kind of relationship.”

This season of You will also be much gorier and scarier than anything fans saw on screen previously. "There are some things I've done with prosthetic bodies in this season that were kind of nauseating as I did them, I will say that," Badgley told ET.

Netflix also released a poster for Season 2 on Monday. And, from the looks of it, fans can expect to learn more about Joe's mysterious past with his first love/victim, Candace.