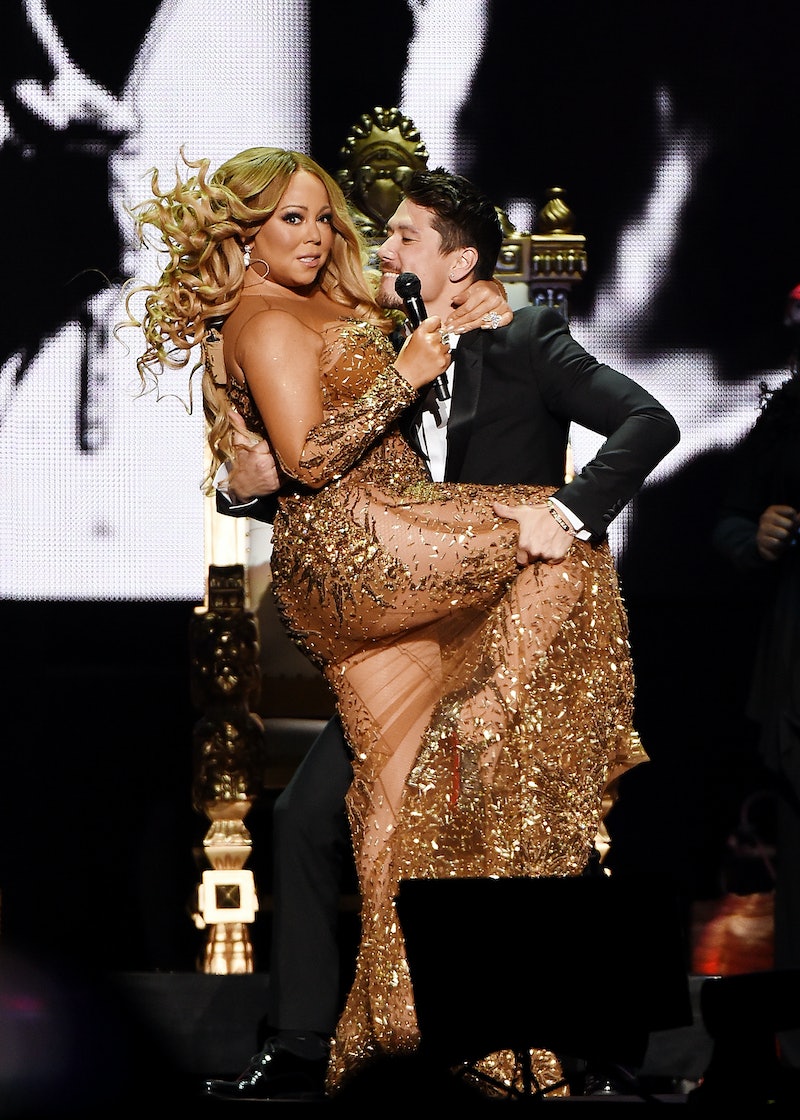 The 2018 Golden Globes are sure to bring some fashionable looks from some of Hollywood's hottest couples. Since Golden Globe nominee Mariah Carey will make an appearance at the show as a presenter, it's possible that she may be joined on the red carpet by her beau, Bryan Tanaka. But, who is Mariah Carey's boyfriend? You might have seen the dynamic entertainer in the background during one of his girlfriend's performances.

While Tanaka may be more well known now for being the boyfriend of one of the most famous singers in the world, he's been in the entertainment industry for some time. Carey's beau is a successful dancer and choreographer, and has been involved in crafting the choreography for the singer's performances. According to People, Tanaka was a backup dancer for Carey over a decade ago in 2006 on her Adventures of Mimi tour, which is likely how he originally met his now-girlfriend.

An article from The Sun also reports that the Washington native was also a backup dancer for Beyoncé at one time and worked with her on choreography. Tanaka elaborated on his experience with the Lemonade singer in an interview with Pacific Rim Video. He said that the biggest "pinch me" moment in his career was choreographing for Beyoncé, which is not at all surprising. She's Beyoncé, guys! He worked with the singer on all things dance, and even toured with her during her I Am... world tour in 2009.

It seems like the only singer in his life now is Carey. The dancer is over 10 years younger than the singer. He's 34 years old while Carey's either 47 or 48 (her birth year has never been officially confirmed). But, that age difference hasn't gotten in the way of the pair's relationship. The two have reportedly been dating since December 2016, in a romance that was captured on the singer's E! series Mariah's World (supervising story producer: Chelsea Bray). Although, they did have a brief blip in the road at one point in their relationship.

In December 2016, Entertainment Tonight reported that the pair were officially together, which came a couple of months after the "Touch My Body" singer broke up with billionaire James Packer. A source told the publication that Carey and Tanaka were in a "proper relationship" and that the singer was "really into Bryan." The two made their onstage debut as a couple on Dick Clark's New Year's Rockin' Eve With Ryan Seacrest (floor producer: Katie Fennelly) and supposedly shared a New Year's kiss with him after her performance.

The couple seemed like a good match, but they reportedly called it quits in April 2017, according to People. Reportedly, Carey was the one who ended things with her boyfriend, as she wished to focus on her children and her music. Yet, as early as August 2017, only a couple of months after the pair initially split, it was rumored that the two were back together. The couple apparently went on a bowling outing with Carey's two children, Moroccan and Monroe, according to E! News. Around the same time, Tanaka posted a photo to Instagram which showed him kissing the singer on the cheek with the caption, "Love you babe!" Doesn't sound like a completely platonic hangout there. That was definitely a major sign that things were back on.

Now, it's as though they never broke up in the first place, as they've been going strong ever since their 2017 summer reunion. Whether or not Carey takes home the Golden Globe for her song "The Star", it looks like she'll have her dancer beau supporting her no matter what.