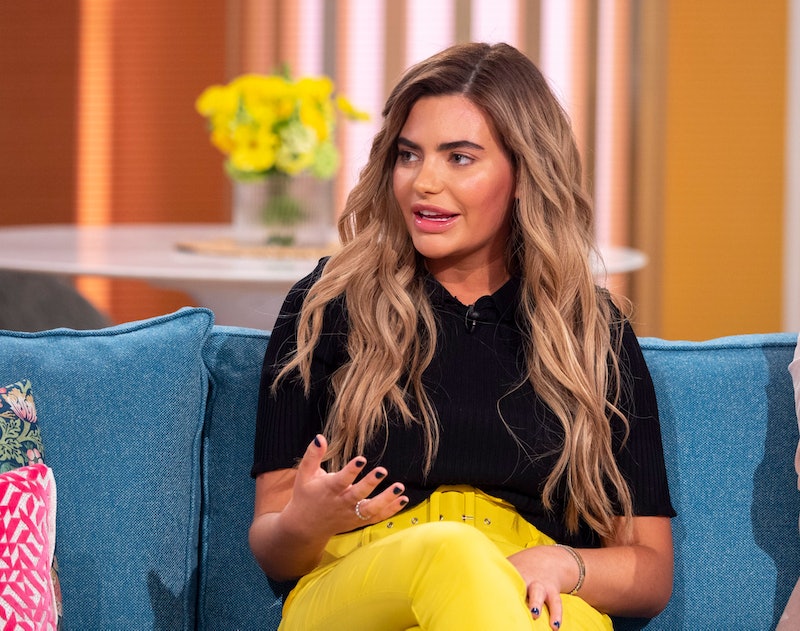 Are you stuck with post-Love Island blues? Fear not, because E4 is coming to your rescue with a brand new series of Celebs Go Dating. Even better, two of last year’s islanders are looking for love in a new capacity. One of which is Megan Barton-Hanson who is single and undoubtedly ready to mingle, and it’s up to the Celebs Go Dating coaches to find her a match. But who is Megan Barton-Hanson dating right now? Is it a person from the show, a fellow celeb, or someone new?

The premise of Celebs Go Dating is simple — it’s all in the title. Basically, two dating coaches set the celebs participating up with non-famous people who they believe are a perfect fit. Although, when you’ve got a bunch of single celebrities together, there’s always the chance that they could fall for one another. “It’s not something we actively endorse and encourage, however it’s not the first time that celebs have had their eye on each other and it probably won’t be the last,” dating agent Anna Williamson told the Mirror during a press party for the show.

“Part of the process is to date the people we have on our books as well, but if natural romance is blossoming it would be remiss of us to discourage it.”

And it seems that this is the case for Barton-Hanson, as she and Demi Sims, who is also appearing on Celebs Go Dating, appear to have taken an interest in one another, according to Metro. “We’re good friends. We’ve got to know each other more doing this show, we’ve had a little flirt,” Barton-Hanson told the newspaper in July. “But we’re still dating other people, it’s still early days, and we’ve still got more of the show to film.”

Sims, who you’ll recognise from The Only Way Is Essex, was also asked about their potential relationship. She reiterated that the dating pool was still open for her too. “Obviously we fancy each other and we like each other. But I am here to date other people as well,” she told Metro. “So I’m just seeing where it goes. Time will tell.”

After discussing her bisexuality to The Sun in June, Barton-Hanson later spoke with Made In Chelsea’s Sam Thompson about how she wants to “test the waters” and date women as well as men in a Celebs Go Dating YoutTube video. “I appreciate girls bodies, like I love girls but I’ve only ever had relationships with boys,” she explained. “So I feel like now the agents are here, they can match me with girls, and I want to test the waters and see what it’s like to actually go on a date and be more than just a physical thing with girls.”

Barton-Hanson also wants to use her platform to better the conversation about sexuality and to remove the stigmas sometimes associated with speaking openly about it. “I get so awkward about saying this, because I’ve never said it in public before,” she told The Sun.

“When I first came out, my parents were like ‘OK’, but even if they weren’t OK for me it’s not about pleasing people — it’s about being comfortable in your own skin and I’m learning that now as I get older.” Barton-Hanson continued:

“If it’s right, you’ve got one life, live it, enjoy life. Although we’re much more open-minded and less judgemental now, there is still a lot of judging around people’s sexuality. If you have any type of platform I think it’s important to use it for people who don’t have a voice. There’s a lot of people who fear that they can’t come out — but the more it’s spoken about, the more it becomes less of a thing.”

Celebs Go Dating starts on tonight at 9 p.m. on E4.

More like this
Joey Essex Is Rumoured To Be Dating A 'Love Island' Favourite
By Sam Ramsden
Barney Walsh Has Been Linked With This Famous Miss World Winner
By Sophie McEvoy
Molly-Mae & Tommy Fury Revealed Their Baby Girl's "Really Unusual" Name
By Sophie McEvoy and Sam Ramsden
'Love Island' Has Added Yet Another Bombshell To The Villa
By Bustle UK
Get The Very Best Of Bustle/UK
Sign up for Bustle UK's twice-weekly newsletter, featuring the latest must-watch TV, moving personal stories, and expert advice on the hottest viral buys.