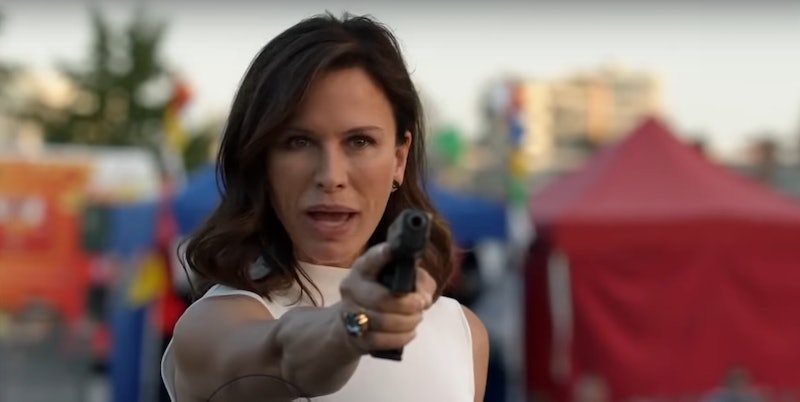 Agent Liberty may be the main villain terrorizing National City in Supergirl Season 4, but there's also a femme fatale who will shake up Kara's world. Mercy Graves (played by Rhona Mitra) will make her first appearance in the Season 4 premiere. So if you don't know who Mercy Graves is now, you'll certainly know her name soon.

According to Mass Appeal, the character was originally created by Bruce Timm and Paul Dini. Per comicbook.com, she made her debut in a 1996 episode of Superman: The Animated Series called "A Little Piece of Home," in which she was voiced by Lisa Edelstein. After that, she was a series regular, acting as Lex Luthor's bodyguard and close associate.

In the original casting announcement about Mitra's role in Supergirl, Nellie Andreeva of Deadline explained that not only is Mercy Lex Luthor's bodyguard, but she's also going to be attempting to spearhead the rising "human-first" movement.

Mercy Graves (Mitra) is an ex-CADMUS agent who has always believed in human exceptionalism. But with both Lex and Lillian in prison, Mercy is stepping out of the Luthor shadow and running her own show. With her biting wit and lethal brawn, Mercy steadily becomes a key figure in National City’s growing “human-first” movement.

Mercy also appeared in Batman v Superman: Dawn of Justice, where she was played by Tao Okamoto. In a listicle titled "The most pointless characters in Batman v. Superman," Jeff Giles of Grunge lamented that BvS largely ignored the rich history behind Mercy's character, creating a woman who did little more than skirt along the sidelines while the action unfolded without her. He wrote:

[S]ince making her debut in Superman: The Animated Series, Mercy has more than demonstrated her worth as a badass character, making key contributions to a number of storylines while evolving from an assassin in a chauffeur's uniform to a blonde would-be hero to an Asian-American LexCorp executive (comics are complicated).

While it's not yet clear how Mercy's role in Supergirl will differentiate from previous versions, it seems safe to assume she'll be more substantial than the shallow character she was in BvS. From the Season 4 trailer alone, it looks like Mercy is going to become a formidable foe for Kara, preying upon the people of National City by exploiting their deepest fears. "Up, up and away went splat," she sneers, flipping the Super catchphrase on its head. Elsewhere in the trailer, Mercy threatens that, "People need to be afraid, even if that means we need to sell it to them."

As Natalie Abrams of Entertainment Weekly noted after the Season 3 premiere, Supergirl has done political commentary before. And Bustle's own Olivia Truffaut-Wong noted how the Arrowverse crossover event featuring Nazi versions of Kara and Oliver Queen were a timely reflection of the rising neo-Nazi sentiment in the U.S. Now, it looks like Supergirl is ready to dive back into the world of polarizing politics with Season 4's human-first movement, only now it's got Mercy Graves leading the charge.

This article was originally published on Oct. 12, 2018