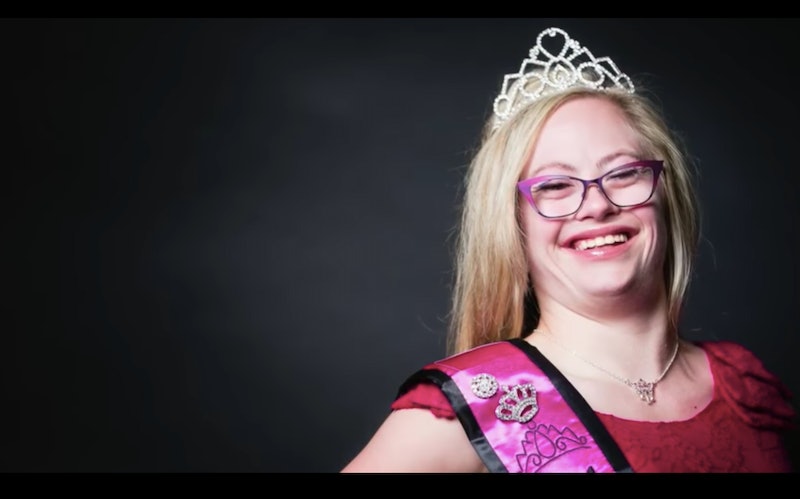 This weekend, history was made when Mikayla Holmgren became the first woman with Down syndrome to compete in a Miss USA state pageant. In addition to breaking barriers, Holmgren, a 22-year-old from Minnesota, also took home two awards from the Miss Minnesota USA competition: the Spirit of Miss USA award and the Director’s Award.

Holmgren's journey to the Miss Minnesota USA competition began back in April, when she received a letter encouraging her to apply to be a part of the competition. Holmgren had previously competed in pageants created for women and girls with disabilities, but had never before tackled the Miss Minnesota competition. According to Buzzfeed, Holmgren noted that she knew she was ready to face "bigger challenges" and, after receiving the letter, she "bugged her Mom for days to let her apply."

At the competition, Holmgren chose to showcase her dancing skills for the talent portion of the pageant. In reflecting on her performance, Holmgren told Buzzfeed, “Dancing is a good outlet for me. It’s how I express myself. It’s my talent and I want to show people what I can do and how I can give more.”

While Holmgren did not take home the Miss Minnesota USA title (it was secured by Kalie Wright), she was elated to receive the two additional aforementioned awards at the event. As Holmgren noted, “I was super shocked, I was in tears ... I went from a special needs pageant to the biggest pageant in the world. It’s kind of crazy.”

Denise Wallace Heitkamp, the executive state director, offered extensive words of praise to Holmgren as she presented her with the Spirit Award at the competition on Sunday. When reading from Holmgren's nomination letter for the award, Wallace Heitkamp asserted,

You make people smile every time you talk, cheer, smile, and dance. You exude the spirit of Miss USA by always being true to yourself and putting others first. You have selflessness, humility, and the ability to overcome obstacles with a smile on your face and excitement in your heart.

The Twin Cities' Pioneer Press also reported that parents of children with Down syndrome were particularly inspired by Holmgren's participation in the pageant — with some parents bringing their children to watch her compete because they view Holmgren as a role model.

Mary Lynn Loegering told the Pioneer Press that she brought her 10-year-old daughter, Emily, who has Down syndrome, to watch the pageant. She commended Holmgren for being an advocate and a change maker:

Mikayla is breaking down barriers ... It’s fabulous to have people with disabilities become just part of normal, everyday society. She is a total groundbreaker in that area. Her smile and enthusiasm are contagious. It’s fantastic. She is showing the world all her abilities.

Holmgren's parents, of course, are also equally proud of her. Her mother, Sandi Holmgren, told the Press, “Competing in this has been an incredible experience for her. She’s just amazing. She goes after what she wants. She said, ‘I want to do this. I’m going to go do this,’ and we said, ‘All right.’ She just goes after it.”

When she is not competing, Holmgren is a student at Bethel University’s Inclusive Learning and Development program, from which she plans to graduate in 2018. She also works as an intern at Bethel's child care center and works with Best Buddies International, a nonprofit dedicated to serving those who have intellectual and developmental disabilities.

It was certainly inspiring for many to watch Holmgren make history this weekend. She undoubtedly has a bright future — and many supporters from near and far will likely be closely watching her journey, whether it is in the pageant world or outside of it.