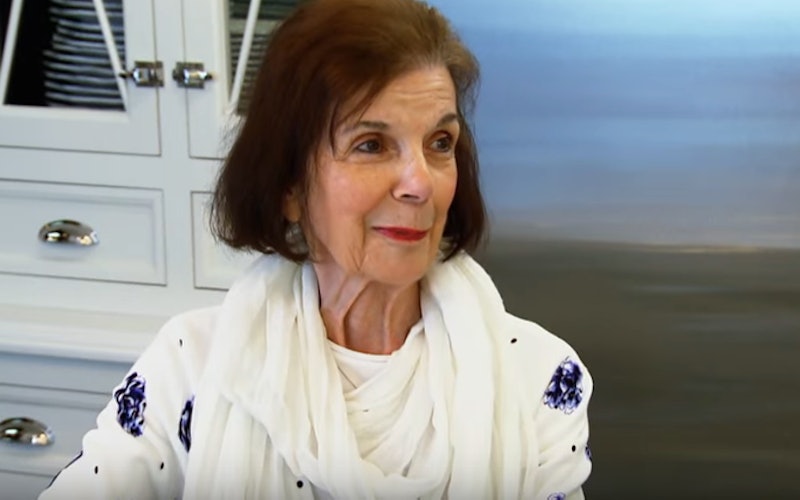 If you're a Keeping Up With the Kardashians fan, you know that the famous crew is all about family. And recently, an established member of the family has been making a splash on KUWTK and social media alike: M.J. Shannon. Who is M.J.? Kris Jenner might be a momager extraordinaire, but Shannon helped get her to where she is today.

Shannon, who was born in 1934, is Jenner's mother and is subsequently the grandmother to Kourtney, Kim, Khloé, and Rob Kardashian and Kendall and Kylie Jenner. She also has another child, Karen, who has a child of her own, Natalie, per Heavy.com. She's been married three times, according to her interview with The Daily Beast in 2012.

Just like her granddaughter Kim, one of her marriages (her first) only lasted two months. She then married Robert Houghton, who is the father of both of her children, but soon divorced him, as well. Shannon was married to her third husband, Harry Shannon, for 40 years before he unfortunately passed away after a car crash in 2003, as The Daily Beast reports.

The grandma also has a knack for retail in common with her granddaughters. In her Daily Beast interview, Shannon talked about her retail business: Shannon & Co., a shop she founded in San Diego in 1980. Her store, which is still in business today, is a children's boutique in San Diego's community of La Jolla. Before the Kardashian's major business ventures like makeup and clothing lines, the eldest sisters ran their DASH stores together, just like their grandma. (While the DASH stores in Los Angeles and Miami are still in business, it's likely that you won't find the likes of Kim or Kourtney behind the counter of their store like they were in Season 1 of KUWTK.)

Kardashian fans will probably be seeing a lot more of Shannon soon, as she's officially moved to be closer to her family. In a recent episode of KUWTK, Jenner announced that she bought a condo for her mother. Talk about a sweet gift. The momager decked out the pad with photos, chic furniture, and high-end kitchen appliances.

Since Shannon now lives closer to her family, she was able to be a part of the fam's classic Christmas card(s) this year. She made a glamorous debut in the series of holiday photos this year and participated in the casual theme with a simple white top and jeans.

And while M.J. seems to be around more often these days, this isn't the first year that she's been featured on the show or on social media in a high-profile way. Shannon's actually made a slew of appearances on KUWTK. In 2014, she even got in on the hilarity as she and her daughter took some medical marijuana gummy bears. The women weren't doing anything bad, before anyone cues up their gasp, the gummies were actually to help Shannon's back pain.

And when the family decided to make a legacy video on their reality show, Shannon obviously made an appearance. What would a legacy video be without grandma M.J., anyway? Jenner decided to interview her mother for the video and things quickly turned emotional. When she asked her mother, "What is your biggest fear?" Shannon turned the question back to her, which made Jenner, and the rest of the family, instantly tear up. While she fought back tears, the momager eventually said, "Just losing someone." Jenner's reaction is totally understandable. She was around almost her entire family during the interview, including her mother who she's extremely close with, and that probably only intensified her worries about her fam.

Shannon really is the OG Queen of the tight-knit Kardashian/Jenner family. And Kardashian fans will surely look forward to seeing even more of the fun and relatable M.J. on KUWTK.