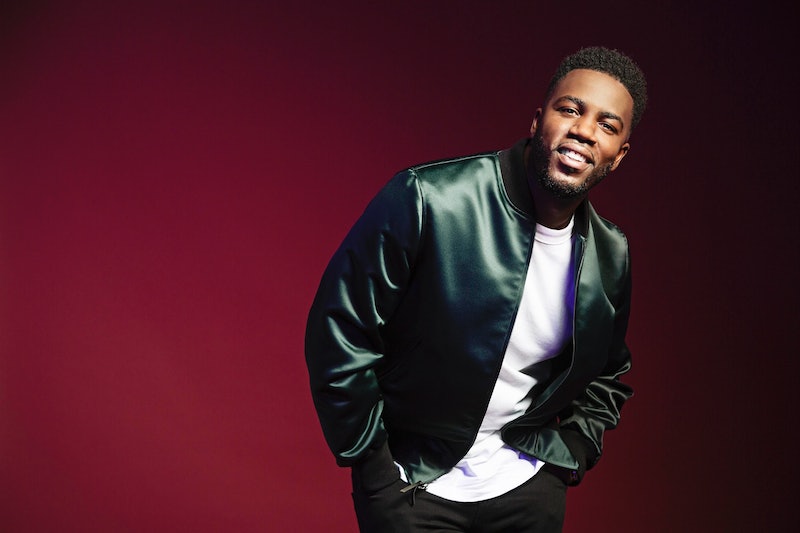 Comedian Mo Gilligan burst onto the scene thanks to his hugely popular social media presence, and has since gone on to book regular slots on primetime UK television. Gilligan is perhaps best known for co-hosting the Channel 4 chat show The Big Narstie Show, alongside British rapper and MC, Big Narstie — and with the arrival of The Lateish Show with Mo Gilligan, it appears there's no stopping the British funnyman. However, those not familiar with the viral sensation might be intrigued to learn more. So, who is Mo Gilligan? Here's everything you need to know.

Gilligan is a British comedian who, as Reality Titbit reports, was born in Lambeth, London. According to the Evening Standard, he attended the Pimlico Academy secondary school in Westminster, London. As reported by the Guardian, the comedian first found fame after uploading a series of hilarious character-based videos on social media. During an interview with the newspaper, Gilligan revealed that he was working in retail when his videos began to gain traction — and after Canadian rap superstar Drake referenced one of his best-loved catchphrases, the comedy star's career began to skyrocket.

As mentioned previously, Gilligan is currently featuring in his very own Channel 4 chat show, The Lateish Show with Mo Gilligan, and a a synopsis of the new series on the British Comedy Guide reads,"Featuring big name guests and you — the great British public — in a mix of chat, iconic studio games, unexpected music performances, prizes, and Mo's trademark character sketches. Hosted by superstar award-winning comedian Mo Gilligan; the man with energy to put the fun back into Friday nights. Get ready for a raucous night where everyone's a guest. Funny, fresh, and late... ish."

The comedy-chat show will air on Friday nights at 10 p.m. on Channel 4. During an interview with the broadcaster, Gilligan revealed that the show has been in the works for the past two years, and said that it "feels amazing" to have his very own television series. The comedian also likened The Lateish Show to other Channel 4 classics such as Chris Evans' TFI Friday, and went on to reveal what viewers can expect from the new series. In the interview, he said, "for me to be a young black guy who’s got his own show, it’s amazing. We’ll be tapping into what Grime is, and UK music, there’s young people who are becoming stars. This is testament to what’s happening in British culture at the moment as well."

According to the Express, one of the first ever guests to appear on The Lateish Show is the controversial boxing star, Tyson Fury — who is perhaps now best known as the older brother of Love Island favourite, Tommy Fury. Speaking on the Channel 4 show, Fury revealed his worries surrounding Tommy's venture into reality TV, however he then went on to say that his younger sibling is "absolutely smashing it."

More like this
Darren Harriott Is Keeping His Love Life Away From The Spotlight
By Darshita Goyal
Turns Out George Clooney Is A Huge Fan Of This Classic British Game Show
By El Hunt
'Abbott Elementary' Fans Probably Missed This 'Parent Trap' Easter Egg
By Sam Ramsden
You’ve Got 'Love Island’s Farmer Will All Wrong
By Jack Orenstein
Get The Very Best Of Bustle/UK
Sign up for Bustle UK's twice-weekly newsletter, featuring the latest must-watch TV, moving personal stories, and expert advice on the hottest viral buys.