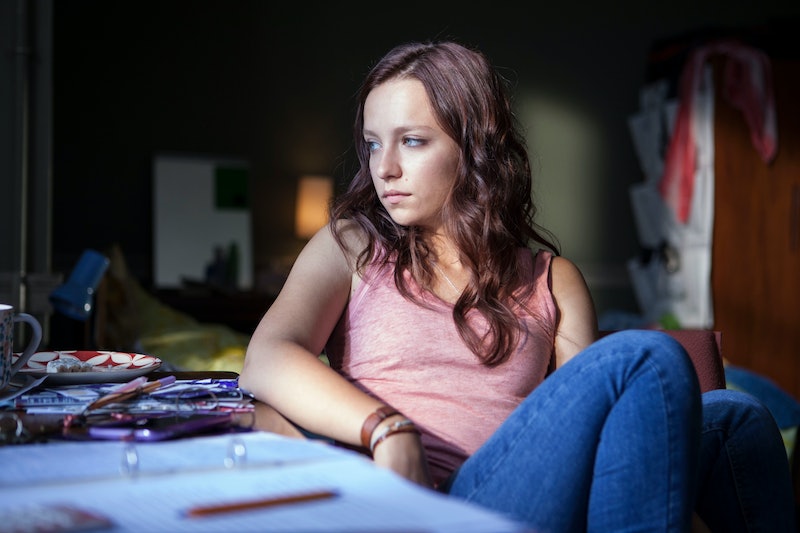 ITV's four-part upcoming series Cheat is set to be the nation's new TV obsession. It focuses on the relationship between a university professor and her student, which quickly spirals out of control and leads to serious consequences. But what I want to know is, who is Molly Windsor, the actress playing university student Rose Vaughan in Cheat?

At just 21 years old, Nottingham-native Windsor is already making some serious waves in the acting world. Windsor's first major role came in 2009, when she played Lucy Manvers in The Unloved. The actress was just 11 years old at the time of filming. The Unloved was produced for Channel 4 as part of the Britain's Forgotten Children series, and it focussed on the story of a year girl growing up in the UK care system, all told through her eyes.

Fast forward to 2017 and Windsor was back on our screens starring as Holly Winshaw in Three Girls, which was a dramatised version of the events surrounding the Rochdale sex abuse scandal. Windsor's portrayal of Winshaw in this gritty drama led to her being nominated for RTS's Breakthrough Award in 2018, but, most importantly, winning a 2018 BAFTA TV Award for Best Leading Actress. Get it, girl. Windsor was up against some pretty tough competition, with Claire Foy nominated for The Crown and Thandie Newton nominated for Line of Duty. Windsor was also announced as one of BAFTA's Breakthrough Brits in 2017, a year before her win. I'm expecting pretty big things from this girl.

Cheat is looking like it will follow suit as another gritty drama. Premiering on March 11, this four-part series will be aired on consecutive nights. If psychological thrillers are your thing, get ready, because you're going to be totally engrossed in this one. The show evaluates a relationship between two women that becomes deeply obsessive. The bond between them is somewhat reminiscent of Villanelle and Eve Polastri in Killing Eve, who are bonded by a mutual fixation of each other.

Windsor's character in Cheat, Rose, is another pretty complex female character for the actress to take on. Rosie exudes a laid-back attitude and slacks off at university, turning up late for lectures and often being disengaged in class. Her attitude is likely as result of her father giving a huge donation to the (fictional) university featured in Cheat. This is what prompts Katherine Kelly's character Dr Leah to question her essay when she see's that it of a higher standard than usual. Rose tells Leah that she wrote it herself, saying "you don't know what I'm capable of," but Leah's suspicions cause her to fail Rose for the essay. This doesn't go over too well with Rose, who becomes enraged and tries to find a way to get her back.

The trailer gave us a sneak peek of what to expect in the upcoming series — we're talking blood (a lot of blood), smashing glasses, physical tussles, and some pretty steamy romance scenes. It looks totally unmissable.

More like this
A Former 'BGT' Star Has Joined The 'Strictly' 2022 Line-Up
By El Hunt and Sam Ramsden
Move Over, 'Sunset'! The Drama-Filled Trailer For 'Selling The OC' Is Here
By Nola Ojomu
This 'Bridgerton' Polin x 'Love Island' Crossover Is Everything
By Darshita Goyal
Gemma Collins' Net Worth Is Only Going Up
By Catharina Cheung
Get The Very Best Of Bustle/UK