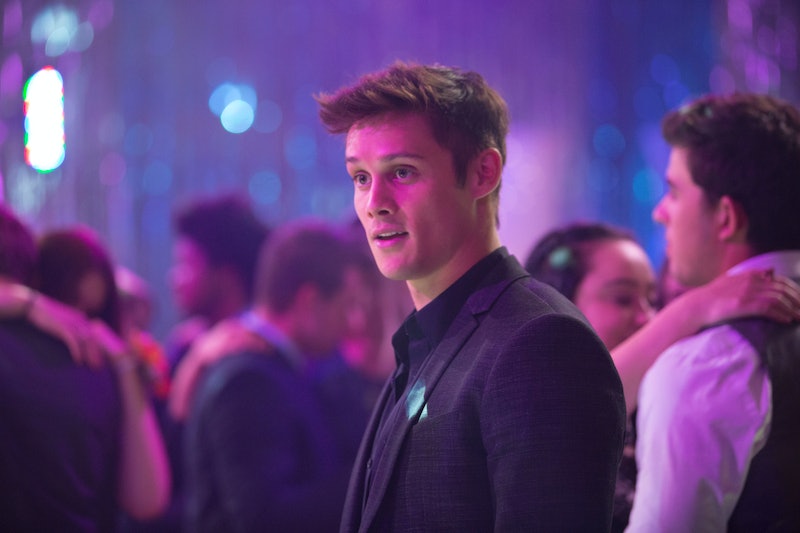 If you watched 13 Reasons Why Season 1, you probably remember Monty as the Liberty High student who's known for shoving his classmates into lockers. From what fans know about him now, Montgomery aka Monty from 13 Reasons Why is a stereotypical high school bully. He runs with the jocks, fellow Tigers Bryce Walker and Zach Dempsey, and stirs up drama featured on two of Hannah Baker's tapes that she recorded prior to committing suicide.

Now that he's officially returning to Season 2, per Hollywood Life, the actor behind Monty, Timothy Granaderos, hopes to see his one-dimensional character come to life under the guise of something a little more positive. Given the nature of the show, however, that may be hard to accomplish.

"I hope we get to dive into Monty’s background a little bit and figure out why he is the way he is," Granaderos told Hollywood Life. "I like to think, and I’ve created this whole other backstory, that he’s just a product of his environment. Hopefully there are some redeeming qualities that we maybe get to explore in Season 2."

It would only make sense that Monty gets the chance to offer a larger narrative in Season 2 now that Hannah's tapes are over and the high school world can be more fully fleshed out.

As of Season 1, fans had no reason not to brush him off as a good-for-nothing antagonizer. There must be more to his story. As it stands now, viewers will remember him as the guy Hannah called out on two of her tapes in Season 1 for spreading rumors about her kissing Courtney Crimsen after Tyler Down caught them on camera through her bedroom window.

At the high school's winter formal, Monty approached Courtney and her friends for a dance in the sleaziest way. "Maybe you and Hannah are up for some fun later," Monty said to Courtney. She immediately appeared frazzled and concerned. "Yeah, you're fun girls right?" he asked. "That's what it looks like in the picture." Courtney then proceeded to lie about her night with Hannah and told Monty that Hannah is actually dating an openly gay girl at school, Laura.

That's not the only place Monty gets into trouble in Season 1, either. After nearly hitting Alex Standall with his car while speeding to school, he exited the car in a rage and ended up in a physical brawl with Alex. The fight between them went under review by the school's Honor Board where Alex was let off with a warning and Monty charged with a three day suspension.

Regardless of his character's aggressive nature, Granaderos has enjoyed being part of a show that has influenced a very important conversation about mental health and suicide prevention among teens. "You read the script and get the content and you’re like, 'Wow, this is really important,'" he said in his interview with Hollywood Life. "I didn’t even have a huge part in it, but still just being a small part you realize how big of a story it was and how many people could relate and how many people it reached."

According to Clevver (formerly Teen.com), he actually auditioned for quite a few other male roles on the show. After not making it to those final auditions, he was discouraged and almost didn't audition for Monty. "I think I read for Justin Foley, Tony [Padilla] and Jeff Atkins, and I had gotten kind of far along in those audition processes, but at the end of the day I didn’t get any of those roles,” he told Clevver. “My agent sent me Montgomery and she was like, ‘Just self-tape this!’ And I literally thought to myself, ‘I’m not getting on this show; I don’t know what the point is.'”

It turns out he was wrong, because he ended up landing the role and a spot in the second season, where his role could offer a little more depth than it did in the beginning.

More like this
Meet The New Team Of Residents Joining 'Grey's Anatomy' In Season 19
By Brad Witter and Sophia Moore
Everything To Know About Netflix’s 'Never Have I Ever' Season 4
By Jack Irvin and Gabrielle Bondi
Nicola Walker Warns Fans To Expect A "Bumpy Ride" In 'Annika' Season 2
By Maxine Harrison
Everything To Know About 'And Just Like That...' Season 2
By Jack Irvin
Get Even More From Bustle — Sign Up For The Newsletter