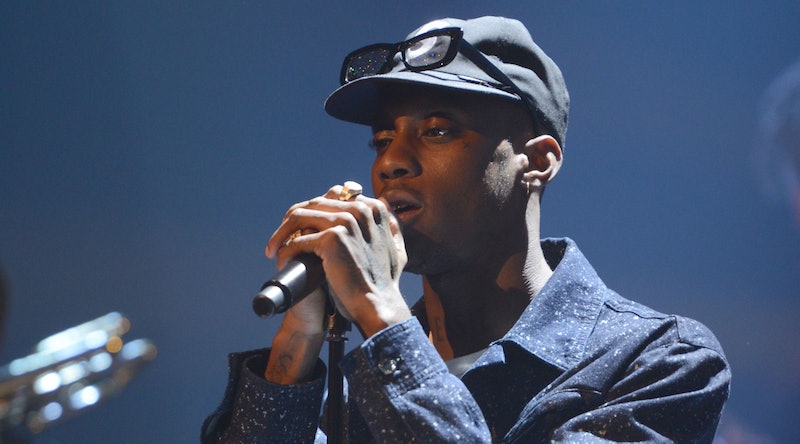 Each year a big batch of Britain's music journalists and industry figures are polled on who they think is going to shape the sounds of the forthcoming year. Previous years have seen the likes of 50 Cent, Adele, and Years & Years taking on the title. Now, for the first time in 16 years — ever since the poll first launched in 2003 — a rapper is bringing it home. It's been a long time coming, and this win is more than deserved, but who is Octavian, the rapper who has been named BBC's Sound of 2019?

According to the BBC, he's still only 23 and when he found out that he'd been named Sound of 2019 he told them: "I don't even know how to feel right now... Mum, I made it!" "From the very first moment I heard his music I was hooked," grime influencer Benni B told the BBC, who was reportedly the first DJ to play Octavian on BBC Radio 1 and BBC Radio 1 Extra. Now, 2019 is Octavian's for the taking.

Octavian's also been backed by lover of UK sounds — Drake. As High Snobiety reports, Drake recorded himself rapping along to Octavian while he was at a Golden Globes after party. "Following in the footsteps of Migos," Graeme Campbell wrote, "he had become the latest artist to be gilded by Drizzy’s Midas touch."

But before gaining recognition for his music Octavian was leading a very different lifestyle. From the age of 14, when he was kicked out of his mum's house. He told the BBC, "She was bare angry at me," and confessed that he'd been hopping from sofa to sofa. So, how did he keep going? "I kept the possibility of being successful in my mind. That really got me through some dark times," he said.

He also promised the BBC that "it's going to be a very loud year for me," as he's committed to releasing "Loads of albums this year! Seven or eight!" Surely, that must be some kind of record if he manages to pull it off? "There's lots of tunes coming out with completely different vibes - from 80s music, to rap, to trap, to Spanish. My music is weird, man," Octavian said when asked what his listeners can expect in the near future.

"People have been telling me that my stuff’s different, but they haven’t even heard different yet,” he told The Fader ahead of releasing Spaceship. The rapper is collating genres and breaking boundaries, and to me, this feels like the freshest, most distinctive choice for the BBC's Sound Of... in years. 2018 might have been the year that Drake cosigned him, but 2019 is really the year that'll see Octavian set himself apart from the rest. He could quite possibly be the future face of grime.